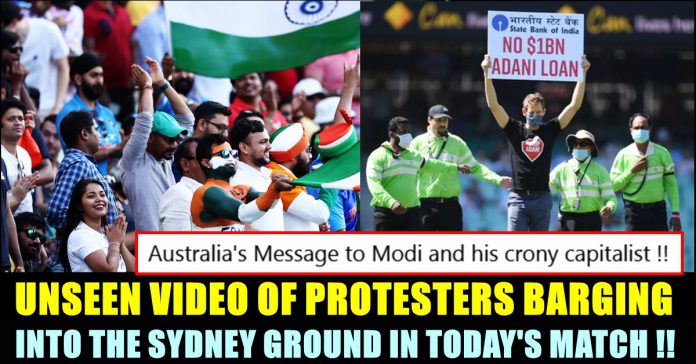 After the sixth over of first one day International match between Australia and India, two protesters barged into the Sydney cricket ground holding a sign board that said “NO $1BILLION ADANI LOAN”, addressing the state bank of India. The incident created a huge controversy as the pictures and videos of the duo is trending in the social media platforms.

The first one day International match between India and Australia inaugurated in Sydney Cricket Ground. Australia who won the toss decided to bat first. The match started at 9 : 30 AM Indian standard time. The match started with highest expectations as fans of Indian cricket team were waiting for it for a long time. They were going to witness a match with live audience after a year and the fact that players of Team India are going to don a new jersey for the series, raised their expectation levels.

After the 6th over in the first innings, The unusual pitch invasion was followed by the security officials taking the protesters out. They broken the secure bio bubbles under which the International matches are being played amidst the COVID 19 pandemic. It has been reported that several other protesters also surrounded the Sydney cricket ground.

Main reason behind the invasion is the loan of Rs.5000 crore that going to be lent by the State bank of India to the Adani enterprises, mining company in Queensland, Australia. After Indian Prime minister Narendra Modi’s trip to Australia in the year 2014, State bank of India had approved a $ 1 billion loan for the Carmichael project.

However, the loan was revoked after the protests escalated and the State Bank of India found itself in trouble over “crony capitalism” charge. Many including critics believed that the loan was approved because Adani has been a long time supporter of Modi.

A coal mine was acquired by Adani in Galilee Basin in the year 2010 and was expected to produce 8-10 million tonnes of thermal coal every year. It was alleged to be a low quality with high content of ash to generate electricity. This approval was opposed by green groups as they believed that it would affect the Great barrier reef.

The protesters firmly believe that the project of Adani will only threaten the existence of coral reef. “It will allow over 500 ships to pass through the Great Barrier Reef heritage area and also “get access to 270 billion litres of Queensland’s precious groundwater for 60 years, for free” says a website called as “StopAdani.com”.

The project also involves building a railway line between the mine and Abbot port point. The estimation for the infrastructure would cost around $3.3 billion, according to reports. However, in 2019, Adani received a go ahead from the authorities of Queensland’s Department of environment. The company recently announced that it will start the production during 2021. To start the project, the company has approached SBI for a loan.

This incident had brought the social media attention as the protesters expected and people are uploading tweets against Adani and Modi.

Australia's Message to Modi and his crony capitalist !! #NoAdaniMines pic.twitter.com/TMsv6V12rk

first i thought that's edited but no that have happened in Australia amazing …. i wish We Indian could also do same …

VJ Parvathy who became a familiar face among Tamilnadu youngsters in a very short span of time, has conducted a question and answer session...