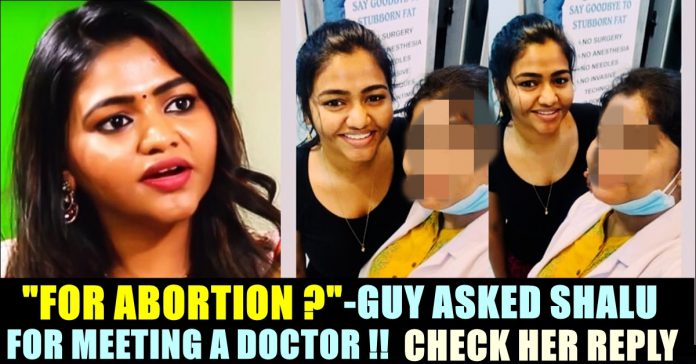 The messages being sent by youths to the female personalities who are associated with cinema industry are not tolerable these days, especially since the lockdown was implemented to prevent the spread of the virus. Though there are many users are following their favourite celebrities to express their love on them, some miscreants are running social media accounts only to abuse people who are widely known are celebrated among people.

You Can’t Go Back & Change The Beginning, But You Can Start Where You Are & Change The Ending. PC : @reethikaashokkumar #shalushamu #blackgirlmagic #simpleme #actresslife

Shalu Shamu is an actress who appeared in Varutha Padatha Vaalibar Sangam movie as heroine’s friend, was Mr.Local in a small role. In her recent Instagram story,the actress exposed such miscreant who made inappropriate comment for uploading a selfie with a doctor.

The actress who is having 3 lakh and 25 thousand followers in Instagram, lately posted a picture with her “buddy” who is a doctor. Adding the story Shalu wrote “Met this buddy today” by tagging her friend.

Shalu Shamu who is currently involved in a campaign against Meera Mitun who dragged the wives of prolific actors Suriya and Vijay, earlier, made it public how a producer approached her for casting couch. Shalu revealed that she got approached by a director to sleep with him to get a role in his upcoming movie with Vijay Devarakonda. Shalu Shamu who has a huge fan following in social media platforms such as Instagram and Twitter has revealed it through her Instagram story while answering to one of her follower.

Now, the actress exposed one of her follower who made an obscene comment on her Instagram story. On seeing the picture with a doctor, the user asked whether the unmarried actress is going to have an “abortion”. Frustrated Shalu, captured the screenshot of his message and asked her followers to report his account. The user named as Nithesh abused the actress with the “B” word as well.

Asking her followers to report him to block his Instagram profile permanently, Shalu Shamu wrote “I do see craziness in my life on and off but this is way too much. Guys please report and block” the actress requested through her story.

Check out the screenshot of the actress’s story :

Knowing that there are no severe laws created yet to put them behind the bars for making a comment in social media, people, mostly men who owns a smartphone are sending such abusive texts to whomsoever they want without giving a thought about the consequences. It is high time for such people to think twice before letting their words out in social media as it would become public sooner than they think.

A Video Of “Yogi Babu” Leaked By Varalakshmi From “Sarkar” Sets !! Vijay Comes In Cameo !!