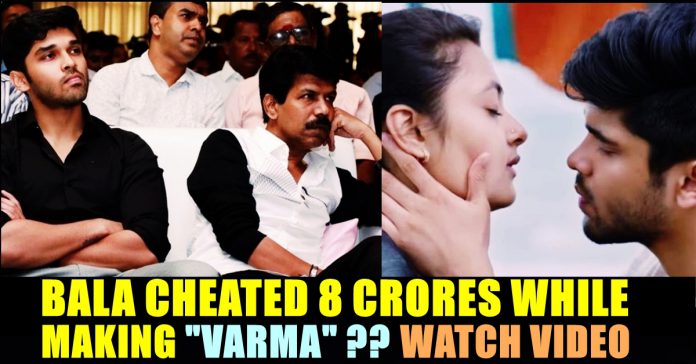 The film which was re shot with new cast and crew, was released on November 21 and is running successfully in theatres. As soon as the film released, reviews pouring from all over the internet from those who watched the movie. The most awaited review of Blue Satta also released.

In his review Blue Satta has revealed an unknown fact the Bala’s Varmaa. While talking about the performance of Dhruv Vikram in “Adhithya Varmaa” Blue Satta Maaran said that he would have gained the experience of acting in 100 movies while working with Bala. “Many of us who came with me to watch the movie said that it does not looks like a first movie for Dhruv. It is not a first movie for him. It is hundred and first movie of him as he had worked along with Bala in a whole movie. Every actor who worked with Bala will tell this” said Blue Satta who further added that the expense to work with Bala went a bit too high.

“Bala made his Varma by receiving 11 crores from the production house in first copy basis. But the film he shot was made only with 3 crores and had duration of 2 hours which is one hour less than the original version. On seeing the final out of Varma, the family of Vikram shocked and decided not to release the film. However, Dhruv had trained as an actor under Bala’s making about which they could get a little happiness” said Blue Satta in his review.

During the controversy, E4 Entertainment, the production house of both Varma and Adhithya Varma announced that they will not release Varmaa helmed by Bala. The production house said they were not happy with Varmaa’s first copy provided by Bala’s B Studios.

Later Bala was replaced by Gireesayya, the filmmaker who was associated with the original version. Now after the film’s release many fans of director Bala are demanding his version of Arjun Reddy.

What do you think on this statement of Blue Satta ?? comment your views below !!

Previous articleLeading Actress Reacts On The Disgraceful Hashtags Of Tamil Fans !!
Next articleExperienced Actor Refused To Act In “VALIMAI” !!