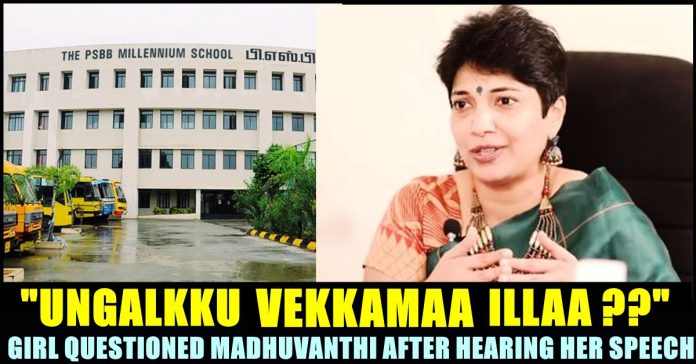 Along with hashtags “”PSBB”, “Ban PSBB”, a number of twitter spaces took place during the evening of Monday regarding the complaint that emerged against a teacher named Rajagopalan. Police have arrested him under POCSO along with 5 other acts and the investigations are underway after hundreds of students came up with complaints accusing him of sexually harassing female students. Actor YG Mahendran, son of the school’s founder Mrs. Rajalakshmi Parthasarathy reacted to the issue by sending a mail to the authorities of the school management. Meanwhile, YGM’s daughter Madhuvanthi took part in a twitter space and expressed her opinions regarding the ongoing issue.

The Twitter space, title of which read “Are educational institutions being attacked”, was hosted by Arjun Sampath. Madhuvanthi participated in the space as one of the speakers and said “As soon as the election result was out, they made me aware of it. It is expected. People who belong to Dravidian parties are targeting schools like Padma Seshadri and spreading Anti Brahmin wave for 50 long years. They need Brahmin girls if they want children for their future generation. They also need Brahmin collectors, Brahmin lawyers and Brahmin doctors to hear suggestions from. But they will oppose Brahminism” Madhuvanthi said.

“They started targeting me effortlessly. They even started a separate page named “Madhuvanthi Troll” to make fun of me” she further said in the space, screen recorder of which did rounds in the social media plaftorms.

Reacting to this speech of Madhuvanthi, a twitter user who was listening to her, requested to speak in the space and said “This is for you Madhuvanthi mam. I feel ashamed even to mention you as “mam”. On the day so much has happened in the school that you are a trustee of, Aren’t you ashamed to come here and talk about all this ?? “Are educational institutions being attacked”?? A teacher has committed a crime. You refused to talk about it and talking about whether educational institutions are being attacked. Don’t you have shame ?” she asked Madhuvanthi.

Here’s the recording of it. pic.twitter.com/4DM2nMbMX6

“Firstly, I am not a trustee of the school. She is misinformed. I am an alumnae as much as every other alumnae of the school. The person who has made the mistake has to be brought to task and there is no two ways about it.” Madhuvanthi said after choosing to reply to the twitter user.

“I am not ashamed of being a student of PSBB or being an educationist or of being a grand daughter of Mrs. YGP, I am ashamed that a teacher in a school that I studied in has done something like this and he has to be brought to books and he will be. But, having said that, I am not ashamed to call myself a Hindu or a Brahmin, I, certainly will not tolerate Hindu or Brahmin bashing on the pretext of trying to talk about feminism. I am sorry, This is my answer to you mam” she further said.