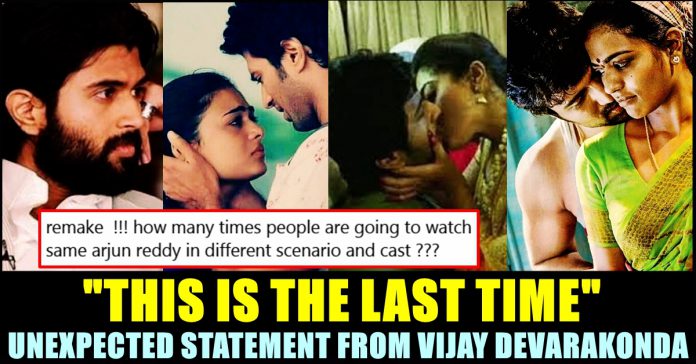 Unexpected Message From Vijay Devarakonda For His Fans !!

While releasing the trailer of his upcoming film “World Famous Lover”, Vijay Devarakonda has posted an important message to his fans and followers. The actor who is next to be seen in “World Famous Lover” rose to fame through his film “Arjun Reddy”. The film became a blockbuster not only in Andhra but the people of Tamilnadu and Kerala also celebrated the movie and it impressed the youths in big time.

Now the trailer of his next film “World Famous Lover” has released. Directed by Kranthi Madhav, the film features Vijay Deverakonda, Aishwarya Rajesh, Raashi Khanna, Izabelle Leite and Catherine Tresa in the lead roles. The film which has been in the making for about a year is currently in the post-production stage. On January 3, the makers unveiled the film’s teaser amid huge expectation. The one-minute-long teaser is full of emotion ranging from love, heartbreaks and sadness. We also see glimpses of Vijay Deverakonda displaying his rage.

Now the trailer of the film has released as an extended version of the teaser. It streams with the voice over of the actor narrating about what the film is about. The trailer suggests Rashmika Mandanna as Vijay Devarakonda’s partner, Aishwarya Rajesh as his wife, Catherine Tresa as his fantasy and Izabelle Leite as his girlfriend.

The trailer is currently trending at the number 2nd position in Youtube and reached more than 5 million views so far. Now to our shock, the protagonist of the film, attached an important message to his fans and followers about a decision he made. Vijay said that “World Famous Lover” is going to be his last film under the love genre.

“I knew this was going to be my last love story, so we decided to make this one of its kind. Filled with all kinds of love. I present to you, #WorldFamousLover! Releasing this Valentine’s Day – Feb 14th.”

I knew this was going to be my last love story, so we decided to make this one of its kind.

Filled with all kinds of love. I present to you, #WorldFamousLover!

Vijay Devarakonda is indeed facing severe criticism from the audience of cinema for appearing in the same kind of career since his blockbuster movie “Arjun Reddy”. Playing the character of an emotional lover became Vijay’s trademark which is evident through his films such as Geetha Govindham, Dear Comrade, World famous lover and Arjun Reddy.

This tweet from the actor made his followers to react in various ways. Check out some of their comments here :

Excellent trailer. Fresh, fun, romantic, matured and complete love story. You are a brilliant actor and a rock star 🌟🔥

No bro u should have to make love story movies

BJP politician and actress Gayathri Raguramm condemned DMK cadre who abused her by uploading a video of her and mocked BJP leaders such as...

SJ Suryah who is very well known for his directorials, is now busy in acting feel good films. Followed by his adventure drama “Monster”,...