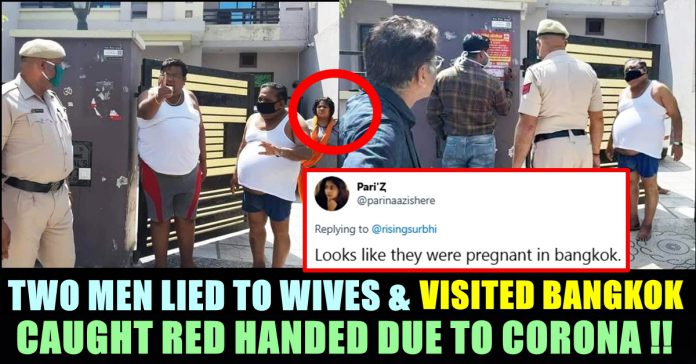 We have seen in many movies in both Kollywood and Hollywood where the protagonists and his friends would lie to their wives about going out on a business trip only to enjoy a vacation without them. Two of such men in Ambala who plotted such plan, failed miserably due to the visit of police officers who visited their house to quarantine them.

The two men allegedly visited Thailand’s Bangkok to party hard and lied to their wives by saying that they are going for a business trip. According to a twitter user Surbhi whose twitter bio says that she is a social worker and activist, Police explained to their wives about their Bangkok visit to make them understand why their husbands are required to be quarantined.

“They told their wives that they were visiting Bangaluru for business and actually visited Bangkok . However, after returning home, Police visited their homes with their travel records and pasted on the gate & explaining to their wives why their husbands need to be quarantined.” read the tweet of Surbhi with a couple of pictures of the men arguing with the police.

They told their wives that they were visiting Bangaluru for business and actually visited Bangkok . However, after returning home, Police visited their homes with their travel records and pasted on the gate & explaining to their wives why their husbands need to be quarantined. pic.twitter.com/FuJNIMci0P

Reports suggests that the incident took place in Ambala of Haryana. After tracking down the travel history of both the men, Police officers visited the house and pasted posters, in a way of warning others to stay away from the house as they are under quarantine for 14 long days. However, the posters were torn by the involved parties twice and when police officers tried to paste the poster for the third time, they allegedly misbehaved with the officials.

“Posters placed two or three times outside the house. But they tore. When the team reached for the third time, they misbehaved. Considering the written complaint of Police, appropriate action will be taken” said Dr. Kuldeep Kumar, Chief Medical Officer of Ambala.

However, this post about the two men received extremely hilarious reactions from the users of the micro blogging site. Check out some of their reactions below :

If they have any sense, they will ask the police to take them into custody. Even jail will be better than what they will have to face.

I am thinking what they did in bangkok, they are in no position to bang with a …..🤣🤣🤣

Well, Karma often proves us that it exists !! Let us pray for the well beings of these poor souls !!