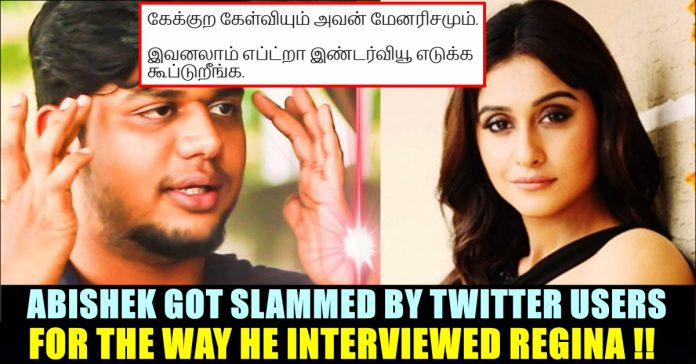 Popular youtuber Abishek who is known for reviewing movies and interacting with popular cinema celebrities, came under scanner for the way he interviewed actress Regina in one of the recent videos which was made for his youtube channel “Open Pannaa”. A twitter user chopped a particular part from the whole interaction and uploaded it in twitter which caused enormous number of reactions in the micro blogging social media site.

Two weeks ago, Ahead of her “Nenjam Marappathillai” and “Chakra” release, South Indian actress Regina gave interviews to a number of youtube channels as a part of promotions. Abishek Raaja, an active film enthusiast who is running a youtube channel named “Open Pannaa” also got an opportunity to interview the actress.

The particular clip which was chopped from the 17 minute long interaction, shows the anchor asking Regina whether it is difficult or easy to identify an equation with her co-stars in a short span of time. Regina answers to him by saying that everything is difficult. The anchor goes on to ask whether she spends time with her co-stars before participating in the shoot in order to deliver a perfect output.

“Do you have time for that ??” Abhishek could be seen asking and Regina replied asking back “Time for what ??” and confirms that she never did it. “Do artists get such opportunities ?? I don’t know” she continued asking and Abhishek says “I feel that it would make things better”. The “Maanagram” actress says that she would get to know the person she is going to work with through the photo shoots and other events which would take place before the shooting of the film.

When the actress used the Tamil word “Sarbaaga” (Regarding) while answering to the question of Abishek, she was interrupted by the interviewer who says that not many would use that word. Further Abishek says that the actress’s name is difficult to pronounce and asks whether she tried to change her name.

Sharing the clip, a twitter user said that the anchor doesn’t have any kind of quality to be a media personality. He also criticized the interviewer’s body language and mannerism. Watch the video below :

Senior film journalist Latha Srinivasan, on seeing the video uploaded a tweet writing “Utter rubbish. People who encourage such idiots are to blame for this. STOP taking random people and trying to turn into journalists.” and tagged Abishek’s official twitter account.

Utter rubbish @cinemapayyan People who encourage such idiots are to blame for this. STOP taking random people and trying to turn into journalists. https://t.co/vi9pMnlS31

Journalist Dhanya Rajendran went one step ahead and shared a three year old article which was written with the reference to an interview conducted by Abishek with actress Andrea. “The article is from 2017. Reposted cos he did it again” she said while replying to a twitter user.

Nice article.. But aren't you too too slow to react? Especially righting an article based on a 2017 interview? Whatever you have written has been said, done and forgotten. This article might only hurt the concerned female actor then supporting her

The article is from 2017. Reposted cos he did it again