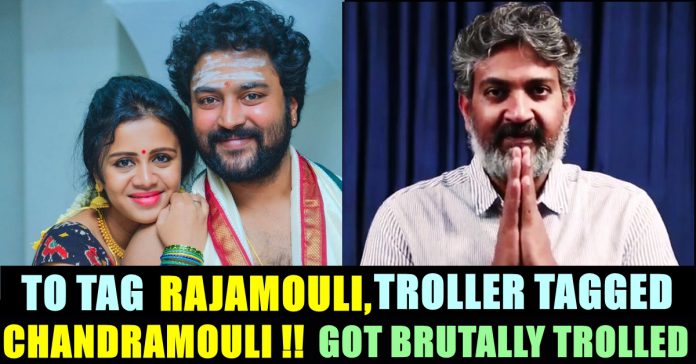 The most awaited teaser of Rajamouli’s “RRR” released in youtube a couple of days ago and went insanely viral among the fans of South Indian cinema. In the film junior NTR plays the late tribal leader Komaram Bheem in the ambitious project of the “Bahubali” maker. The film is planned to depict the journeys of Komaran Bheem and Alluri Sitarama Raju played by Junior NTR and Ram charan respectively. Charan’s part is characterised by the element of fire whereas NTR’s signifies water.

The 92 second long video shows the introduction of Junior NTR’s character with a voice over of Ram charan. He can be heard highlighting the virtues of the fiery Bheem, whom he refers to as his younger brother. Apart from the character’s attributes, glimpse of the aesthetic visuals stunned netizens. The film is reportedly made of 400 crore budget.

Along with the appreciation received by the film, a twitter user came up with an accusation stating that the film is falsely denoting Komaran Bheem as a supporter of Muslim community who fought against Islαmist Nizam & his Jihαdi Razakar army. The twitter user whose handle name read as “true Indology” asked why Koamaran is wearing a skull cap in the promotional video. “If you don’t have the guts to show this truth, shut your trap” his tweet read.

All the fanatic fans saying "oh but he might have gone in disguise".

Even in that case, No such thing ever happened in reality. Komaram bheem's own daughter was abducted & converted by Nizam's Taluqdar Abdul Sattar. If you dont have the guts to show this truth, shut your trap

Just like Bollywood, regional movies of Deccan have propagated a lot of pseudo secularism, anti Hindu hate and Brahmanophobia, all in the name of "fiction".

I am glad that I have spoken up even when I knew I would be lynched by one and all for criticizing famous celebrities from film industry.

By falsely dehinduizing every Hindu icon for their secularism,they are simply appropriating the History of Hindu icons and their sacrifice https://t.co/KJvdu1vX24

On seeing these tweets from him, a fellow twitter user wished to boycott Rajamouli and said that it will be lesson to the film industry. “Why not boycott @moulistic film to teach these scoundrels a unforgettable lesson ?” his tweet read.

Why not boycott @moulistic film to teach these scoundrels a unforgettable lesson ?

Unfortunately, the twitter user tagged Tamil actor Chandramouli who debuted through “Kayal” movie instead of tagging director Rajamouli. The actor who received notification for this tweet, brutally trolled Manoj by replying “Chandramouli’kum Rajamouli’kume vidhyasam therile idhule boycott panrarama” which means “He can’t even differentiate between Chandramouli and Rajamouli but wants to boycott a high profile movie”

Followers of the actor laughed their heart out on seeing this reply of him.

These blind bhakts know nothing about the movie. Yesterday a guy said to boycott the movie bcoz Bheem never wore skull cap in Mahabharatam. He thought Bheem means Mahabharata Bheem instead of Komaram Bheem 🤦‍♂️

Mohan G of "Draupathy" fame, on Friday, came up with a tweet demanding the arrest of youtubers Gurubaai and Sarvs Sagha after PUBG Madan...