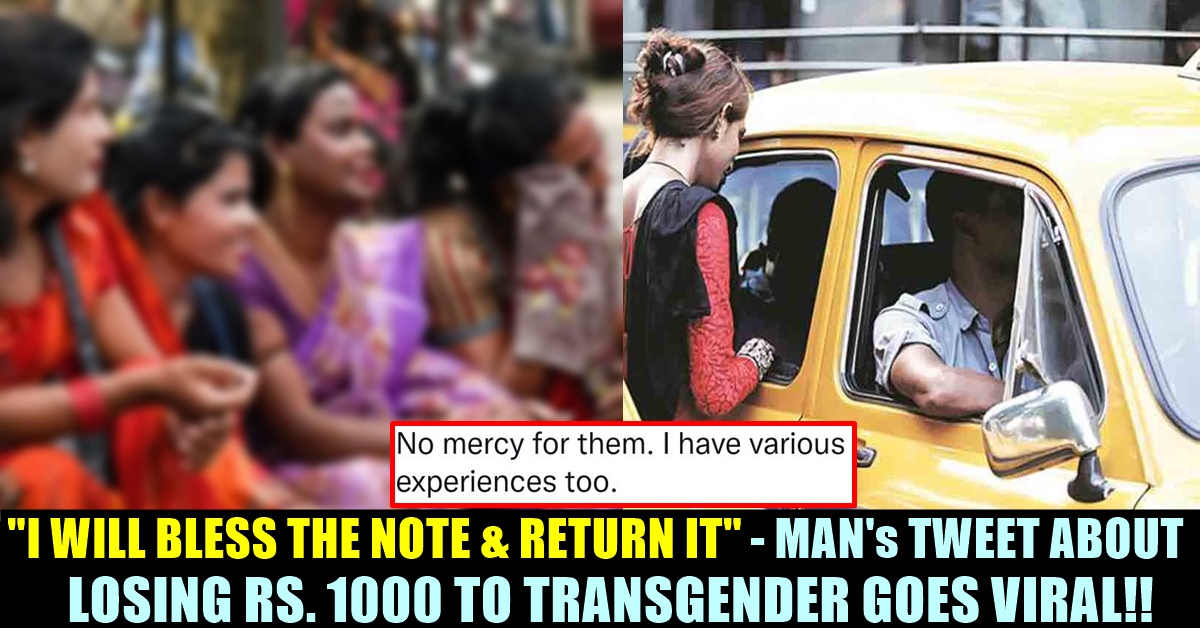 @GauthamMachaiah has shared a tweet saying that he lost Rs. 1000 in a motive to help a transgender. He has narrated the complete experience in the tweet. He has said that transgender’s source of income is only begging. To help a transgender he has offered her Rs. 500. But she has asked for another Rs. 500 saying that she will return it after blessing the note. He has also given the money only to know that she will not return the money. He has concluded the tweet saying that these incidents make people lose their faith in humanity.

How a transgender cheated me… pic.twitter.com/RrKzpye7BH

Many people in the comments have shared their experiences with such people.

Similar thing happened to me. On a train to delhi many many years ago.
I made her give me back the money. Coz it just din’t seem fair & I din’t wanna be the victim of such nonsensical beliefs. I did offer to buy her a few good meals but in vain.

Since then, I have dropped my wife at the Aerodrome side and wait till my wife reach the GKVK bus stop and go back home. Since that day, I stopped giving alms to transgenders in the traffic.

Since then, I have made it a point that if the transgenders don't budge to my request to move away and threaten with a curse. I just tell them, go to the Pakistan or China borders and curse them, so our soldiers can return home to enjoy time with family more often.

Same with my new car while taking home. I had two bady experiences. When i did not give money, she took sand from the road and cursed on my new car. So far doing well. Anyway i dont trust them. I trust god not them

In bengaluru their numbers have increased dramatically these days. You are too generous to give rupees 500. Begging is fine but they are very abusing especially to men. Should not be encouraged and made strict rule against forcefully begging.

Happened same to me once near Marthalli. They took everything from my pocket and kept in her/his blouse. The Pocket was having some Pounds as well since they are not familiar with that currency they just returned that and disappeared in a second.

More than losing 500rs ,it's the feeling of getting cheated irks a lot..I just roll up car windows ,but I am very generous with air check guys in pumps and Zomato guys

Sir, please don't have soft corner towards transgenders or for that matter any beggars it's a big mafia, they pay certain amount to local dons to beg, the rate depends on the traffic movement. My friend owns a bar in Marathahalli junc. He says they drink only costliest scotch.

“Don’t Encourage This” – Fans Got Upset On Seeing This Promo
JUST IN : Internet Can’t Calm After Knowing About Dhoni’s Entry Into Team India !!