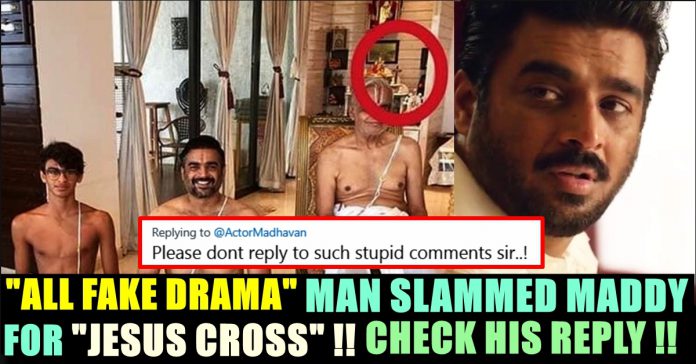 Twitter User Questioned About The “Jesus Cross” In Madhavan’s House !! He Came Up With A Terrific Reply !!

Ace actor like Madhavan is not new to criticisms. He replied them through his work for the criticism about his performance in his movies. In this occasion, the actor could not reply through his acting as a random twitter user questioned about his religious beliefs.

Ranganathan Madhavan, the popular actor who is known for his work as an actor, wished everyone a happy Raksha Bandhan and shared a picture of himself with his son on social media where the two of them could be seen wearing the sacred thread that Brahmins wear. It is also the occasion of Avani Avittam, the auspicious day on which Brahmins change their sacred threads. The actor posted a picture of himself on Instagram wishing everyone the same.

Wish you all a very happy INDEPENDENCE DAY, RAKSHA BANDHAN AND AVANI AVITTAM. Prayers for peace and prosperity for ALL in this world continues.

One of his follower who witnessed the holy cross of Jesus christ in the background immediately slammed the actor by saying that he is doing a fake drama. In his post the user said “Why do they have a across in the background?! Is that a Mandir? You just lost my respect. Do you find Hindu Gods in Christian churches? All this is fake drama you did today!”

Why do they have a across in the background?! Is that a Mandir? You just lost my respect. Do you find Hindu Gods in Christian churches? All this is fake drama you did today! pic.twitter.com/w5mdrSKxRL

Madhavan who saw the tweet came up with a fitting reply. In his detailed statement He wrote, “I really don’t worry about respect from the likes of you. I hope you get well soon. Surprised that in u r sickness you did not see the Golden temple pic there too and asked if I converted to Sikhism.” 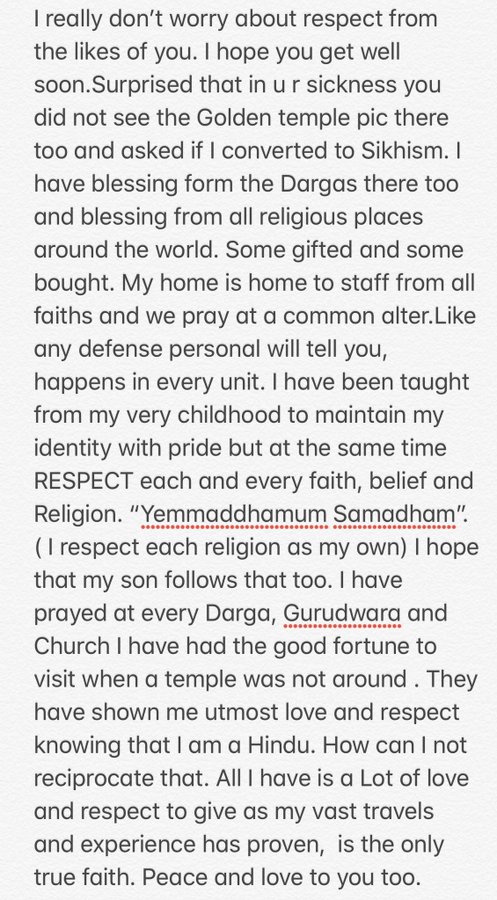 Further he added “”I have blessing from the Dargas there too and blessing from all religious places around the world. Some gifted and some bought. My home is home to staff from all faiths and we pray at a common alter. Like any defence personal will tell you, happens in every unit. I have been taught from my very childhood to maintain my identity with pride but at the same time RESPECT each and every faith, belief and region. ‘Yemmadhamum Sammadham’ (I respect each religion as my own). I hope my son follows that too. I have prayed at every Darga, Gurudwara and Church. I have had the good fortune to visit when a temple was not around. They have shown me utmost love and respect knowing that I am a Hindu. How can I not reciprocate that. All I have is a lot of love and respect to give as my vast travels and experience has proved, is the only true faith. Peace and love to you too”

This statement from the actor lauded by many of the twitter users who said that he does not have to answer these kind of trolls.

Please dont reply to such stupid comments sir..!
Its all upto an individual to follow his culture or not

No one else has a right to criticise that and make a troll out of it..!

You are absolutely right..!

Comment your views on this sane reply from the ace actor !!

Previous articleNot Danush Or Siddharth But This Hero To Play The Lead In “Andhadhun” Remake !!
Next articleThis Famous Hero Asked “Gold Ring” To Actor Vijay After Seeing His Gesture !! Check Out !!

Movie reviewer Blue satta Maaran's post about the pictures of actor Ajith kumar releasing in frequent manner, stirred controversy among the users of the...