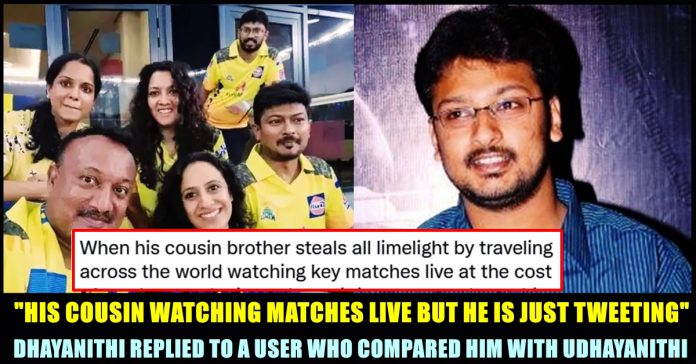 After seeing a tweet uploaded by Dhayanithi Alagiri about the ongoing T 20 world Cup tournament, a twitter user compared him with Chepauk MLA Udhayanithi Stalin who recently watched IPL matches at stadium in UAE. The Twitter user said his Dhaya’s cousin brother Udhayanithi is stealing all limelight by traveling across the world watching the key matches and the former is made to sit in a twon and post his tweets. The online user went on to criticize the social justice that is taking place in the family of former chief minister Kalaignar Karunanithi.

Dhayanithi Alagiri who is an ardent fan of game cricket, always tweets about his personal opinions about the matches. Reacting to the ongoing T20 world cup tournament, Dhayanithi, on 20th of October, came up with a tweet predicting the result of a qualifier match. He said that Ireland is going to beat Sri lanka in the qualifiers by writing “Ireland are going to win tonight!”

Match result went the other way around but among all the reactions his tweet received regarding his tweet, a twitter user named Sriram came up with a reply comparing Dhayanithi and Udhayanithi. “When his cousin brother steals all limelight by traveling across the world watching key matches live at the cost of ex-chequer, he is made to sit in a town and post his tweets.. This is the classic example of social justice within Karunanidhi’s family” his reply tweet read.

When his cousin brother steals all limelight by traveling across the world watching key matches live at the cost of ex-chequer, he is made to sit in a town and post his tweets.. This is the classic example of social justice within Karunanidhi’s family.. https://t.co/SXWhpXwqg5

Most recently, Udhayanithi Stalin watched the matches of IPL in UAE by wearing the jersey of Chennai Super Kings and the pictures of himself cheering for the Dhoni-led team went viral in social media platforms.

Reacting to the tweet of Sriram, Dhayanithi asked who he is and replied to a user who said that the user is a mentally challenged. “Yaaru ji neengha ????” asked Dhaya. Check out his tweet below :

Actor Producer Nithin Sathya and many others reacted to Dhayanithi’s tweet and the latter replied to one of them who said that the user is a mentally challenged. Check out the reactions and Dhayanithi Alagiri’s reply :

Oru id la block panean, then he came on another one and passed random comment. Just not worth.

The latest trailer of Aliya Bhatt and Sanjay Dutt's Sadak 2 became the most disliked trailer on youtube as soon as it go released....

Woman named Vimala Rani caught killing her own husband for questioning her illegal affair with their neighbour. After involving in a romantic relationship, Thanga...