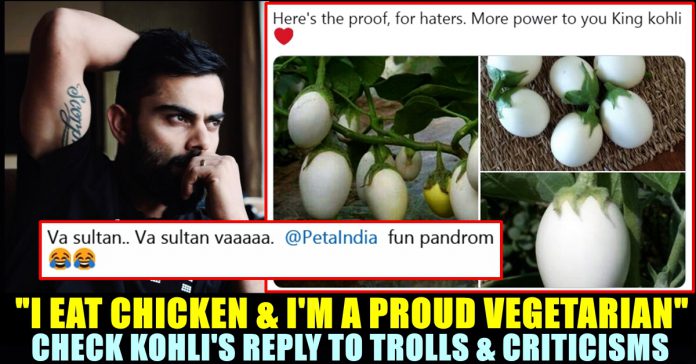 Twitter Trolled Kohli After He Mentioned Eggs In His Diet !! Captain Replied

Virat Kohli, recently conducted a question and answer session with his Instagram followers and mentioned eggs in his diet while answering to a fan who asked him to tell about it. The fitness icon who always remained an inspiration to youngsters and athletes, was happy to share the details on his diet and wrote “”Lots of vegetables, some eggs, 2 cups of Coffee, quinoa, lots of spinach, love dosas too. But all in controlled quantities.” as his answer.

Interestingly, in his earlier interactions with media, Kohli identified himself as a “vegan” and fans got surprised on seeing eggs in his diet. It is notable that his wife and Bollywood actress Anushka Sharma is a vegan and Kohli credited her for playing a major role in the dietary transformation of his life. Kohli’s statements about himself changing vegan, during his interaction with former England cricketer Kevin Pietersen also remembered by fans.

“I had a cervical spine issue which resulted in a tingling sensation in my little finger making it difficult for me to bat. It happened around the Centurion Test in South Africa in 2018. Moreover, my stomach became a bit acidic, my uric acid went high and my stomach started pulling calcium from the bones which actually resulted in the spine issue. Hence, I had to cut down on meat and now I feel better than ever,” the cricketer stated in the interaction.

Fans who are aware of the statements of Kohli, questioned the presence of eggs in the diet of the Indian captain. “An egg tree in Kohli’s garden” tweeted a fan by adding a photoshopped picture of eggs in a plant to troll Kohli. Check out some of such comments below :

Virat Kohli seemed to be a part of a sponsored publicity drive for ‘Veganism’ influencing thousands of his admirers to turn Vegan posing his superb fitness and physical strength as an example while he secretly ate ‘Eggs’ to maintain that! pic.twitter.com/fsw7teiyoK

“My egg is my egg, none of your egg” ~Virat Kohli #vegan

Just like how Kohli accidently or intentionally revealed that his “vegan” diet includes eggs, it all comes down to a fact that its all a PR stunt. Veganism is not feasible, while vegetarianism still is.

Reacting to these comments in social media, Virat Kohli, on Tuesday, came up with a tweet saying that he is a vegetarian but not a vegan. “I never claimed to be vegan. Always maintained I’m vegetarian. Take a deep breath and eat your Veggies (if you want)” Virat said in his tweet by adding funny emojis.

I never claimed to be vegan. Always maintained I’m vegetarian. Take a deep breath and eat your Veggies (if you want 😉)💪😂✌️

The way you have used emojis is alone enough to conclude that you know you’ve been caught red-handed. Ask your PR to stop trying to make you look like something you aren’t. https://t.co/AcZoWlzS6o

I Eat Chicken And I Am A Proud Vegetarian ..😁😉😏😁#ViratKohli #vegetarian pic.twitter.com/CN4CBV1CKg

He said the same thing in this 2019 interview https://t.co/qI5rPcCmjC pic.twitter.com/UcGHFtskBj

Except for some Peta types, nobody cares what you eat Kohli.
Just get us the WTC cup. https://t.co/G62wudRpYg

Here’s the proof, for haters. More power to you King kohli ❤ pic.twitter.com/jLIede60rt

Previous articleTamil Actress Janani Received Accolades From Internet After Removing “Iyer” From Her Name !!
Next articleFinance Minister PTR’s Replies To BJP’s Vanathi In Twitter Are Trending !!

Follower Trolled Vignesh Shivan For His Selfie !! You Must See How The Director Reacted !!

Vignesh Shivan who rose to fame among Tamil audience through directing films like Naanum Rowdy Thaan and Thaana Serntha Kootam is all set to...

The most expensive and biggest reality show of Tamil television forum, BIGG BOSS hosted by Ulaganayagan Kamal Haasan is in trouble, this time even...