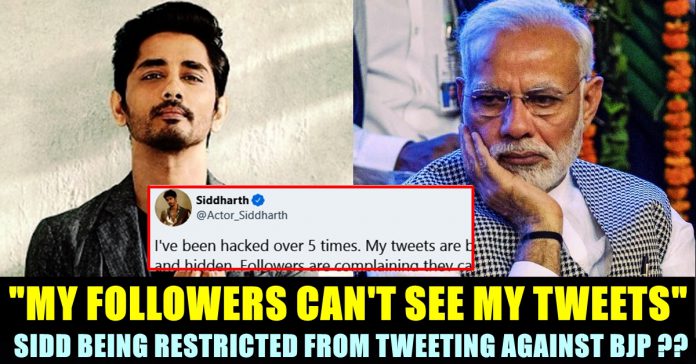 On Monday, Twitter India temporarily blocked some of the twitter accounts which belonged to politicians, activists who were uploading tweets against the BJP party which is currently in the power. It is reported that the accounts were blocked followed by the pressure of the Narendra Modi’s government over contentious new agricultural laws in the country. Actor Siddharth who is known for raising voice for the social issues, has came up with a tweet questioning twitter why it is restricting some of his tweets and hiding it from his followers.

The move drew accusations of censorship as New Delhi ramps up pressure against farmers protesting the reforms, which plans to loosen regulation in the country’s agricultural centre. It is notable that a protester died last week with hundreds of police getting injured last week due to the clash that took place in the capital.

Reports suggests that the accounts, which had been critical of the new laws, were blocked following a request from the ministry of electronics and information technology, according to Twitter. Twitter blocked access to accounts in a localized blackout of some 250 accounts and tweets. The blocks, which applied only for the viewers based in India, came after the Indian government hit Twitter with a legal demand.

The only thing that all the accounts that got suspended had in common is, they had shared content that criticized the ruling Hindu-nationalist Bharathiya Janata Party amidst the ongoing protest movement by farmers. It is alleged that many of accounts used the false hashtag “Modi Planning farmers Genocide” which led to the blockage.

However, the blockages drew widespread condemnation online, Twitter said that it had unblocked all the accounts late on Monday. According to Twitter, company representatives had met with Indian government officials to convey that the tweets constituted free speech and are newsworthy.

Meanwhile, actor Siddharth, on Monday had posted a tweet saying that his twitter account got hacked five times and his tweets are being restricted and hidden. The actor also said that his followers complained to him saying that they couldn’t see his tweets and auto unfollows occurred it seems. Siddharth also said that his twitter follower count hasn’t changed for past 16 months and tagged twitter to question them regarding it.

“I’ve been hacked over 5 times. My tweets are being restricted and hidden. Followers are complaining they can’t see any of my tweets, that they were auto unfollowed. My Twitter follower count has not changed in 16 months. Something is definitely off! What’s up Twitter India ?” Siddharth’s tweet read.

I've been hacked over 5 times. My tweets are being restricted and hidden. Followers are complaining they can't see any of my tweets, that they were auto unfollowed. My Twitter follower count has not changed in 16 months. Something is definitely off! What's up @TwitterIndia??? 🤗 https://t.co/3IMBa8s6vu

Many of the followers who are following Siddharth commented saying that they couldn’t see his tweets and retweets often in their timeline, though he is pretty much active. Days ago, when the outrage between farmers and Police took place in Delhi, Siddharth uploaded a series of tweets supporting the farmers. Read : “There will always be the famous clowns who tell you that protest will kill Democracy. Ignore them” – Siddharth The actor also raised voice for various other issues and condemned the ruling government whenever it is needed.