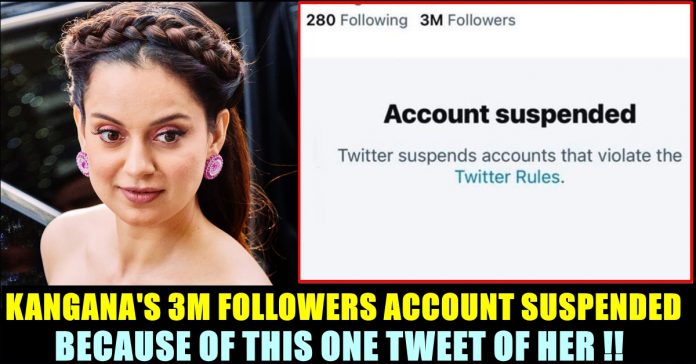 Controversial actress Kangana Ranaut’s twitter account suspended permanently after she uploaded a tweet on the violence in West Bengal post election. The social media site said that the actress repeatedly involved in violating twitter policy and the account got suspended due to “hateful conduct and abusive behaviour”. Reacting to this action of Twitter, Kangana said that she has many other platforms to raise her voice and added that she could even use her own platform cinema to raise her voice.

A tweet uploaded by Kangana Ranaut against Mamata Bannerjee made the twitter management to suspend Kangana Ranaut, according to reports. The actress, reportedly urged Prime minister Narendra Modi to “tame” Mama Bannerjee using his “Virat Roop” from early 2000s in Bengal. Kangana posted the tweet reacting to Swapan Dasgupta of BJP on the violence in Bengal since election results were announced on Sunday. Both Congress and BJP blamed each other for the outrage.

The tweet of the actress sparked outrage and public started demanding strict action against her for tweets. “We’ve been clear that we will take strong enforcement action on behavior that has the potential to lead to offline harm. The referenced account has been permanently suspended for repeated violations of Twitter Rules specifically our Hateful Conduct policy and Abusive Behaviour policy,” said a Twitter spokesperson to the media.

Twitter suspends actor Kangana Ranaut after she urged Prime Minister Modi to show his “giant form from the early 2000s” in Bengal – a reference to the 2002 anti-Muslim pogrom in Gujarat when Modi government was chief minister.

It is notable that Twitter took action against the actress earlier for one of her incendiary tweets. “Time to take the heads off” Kangana tweeted against the makers of the web series “Tandav”. She believed that they hurt the religious sentiments of people through their work. Restrictions were imposed by the Twitter management after the actress uploaded the tweet.

As soon as the account got suspended, Kangana uploaded a video in her Instagram account. “disturbing news, videos and photos from Bengal of people being murdered, gang-raped and their houses being burnt” Kangana said and called for a president rule in the state. It is also notable that Kangana’s sister Rangoli Chandel blamed Tablighi Jamaat for COVID spread and created a huge outrage in Twitter.

Now, after the actress got suspended in Twitter, various kind of reactions are pouring in the micro blogging social media site. Check out some of them below :

If u read this carefully Kangana is actually either exposing or accusing @narendramodi of killing 1047 people in 2002 godhra riot in Gujarat. pic.twitter.com/yu1kNl65z1

Kangana Ranaut made the cardinal mistake of reminding you know who about the you know what.

Australia were 191 for 7 at close of play in their first innings on the second day of the opening Test against India on...

Dentist turned IPS Officer Dr. Varun Kumar who is serving as the Superintendent of Police for Madurai, grabbed the headlines of leading media portals...

More than being an actor and director, Raghava Lawrence is known as an ardent fan of Superstar Rajinikanth. His recent speech in Darbar audio...