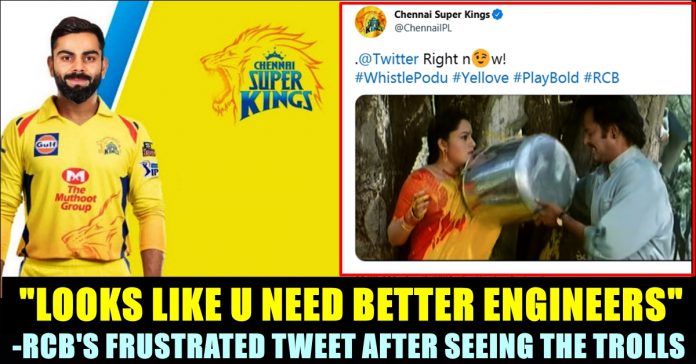 The fourteenth edition of India premiere league is approaching and the social media handles of all the eight IPL teams have already started involving in online banter to keep the fans engaged. Now, a blunder made by the management of Twitter India has left the fans and social media handles of IPL teams talking. Most recently, Twitter introduced team jerseys as emojis and is set to make the most of the widely watched T 20 league in the world.

A new development lets the users of Twitter to see the jerseys of the teams as emojis while writing a team’s name. On Saturday, fans came to know that Twitter has made a blunder as one could see the emoji of Chennai Super Kings while typing Royal challengers Bangalore. As soon as finding the malfunctioned feature, it didn’t take much time for the fans to start the troll war.

On seeing CSK emoji, a fan tagged the official social media handle of Chennai Super Kings and asked “are we lending our new jersey to RCB” and CSK replied saying “Ok. We understand #Yellove is everywhere but.. hey
@Twitter !”

Ok. We understand #Yellove is everywhere but.. hey @Twitter!

Followed by this, the official twitter handle of Chennai Super Kings came up with a tweet posting a popular scene from Padayappa movie where Super star Rajinikanth would pour yellow water on Soundarya’s red colour saree to save her from a bull which gets angry while seeing red.

Check out some of the reactions to this blunder of Twitter :

Now the hashtag #RCB has a CSK jersey near it ayo I CAN’T HANDLE THIS 😂😂😂 pic.twitter.com/IrMLFHoOOR

Now, responding to the memes and trolls, RCB came up with a tweet writing “Hey @Twitter @TwitterIndia , looks like you need better tech engineers. Bengaluru is the right place to start hiring. #WhatsWithYourEmojis”

Meanwhile Rajasthan Royals joined the party and trolled RCB for their part :

Previous articleIPL Sensation Malti Chahar Imitated Thalapathy Vijay & Trolled Her Brother Deepak Chahar !!
Next articleSamantha’s Own Fans Got Upset On Seeing This Post Of Her !!

Super Singer which was started in 2006 is a reality TV singing competition in the Tamil language. The show is televised in India on...

Aajeedh’s First Ever Emotional Post After Getting Evicted !! WATCH

After getting evicted form the Bigg Boss house, Aajeedh Khalique, a contestant of the reality game show, came up with a video message to...