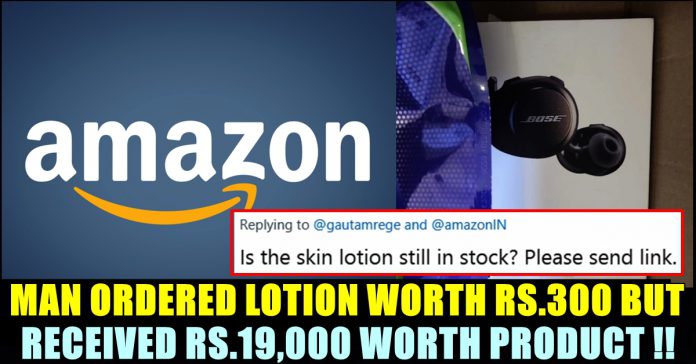 Usually, when an item we ordered in online shopping website gets misplaced, we get angry, file complaints and would wage war against the company. But that is not the case with this Pune man named as Gautam Rege. The man whose bio says that he is a Golang specialist ordered a lotion worth Rs. 300 but received Bose wireless earbuds worth Rs.19,000 from Amazon online shopping company.

When Gautham informed about it to Amazon, the support team asked him to keep the product for free as it was a non-returnable order. Boasting about the unexpected gift he received from Amazon, Gautham posted a tweet which blew up in big time. “Bose wireless earbuds (₹19k) delivered instead of skin lotion (₹300). Amazon support asked to keep it as order was non-returnable!” he wrote by adding celebration and face palm emojis.

Check out the photo he uploaded below :

The tweet Gautham posted along with this picture, received more than 20,000 likes and 4,000 shares so far. The most interesting part about the tweet is the comment section where we could see enormous number envious tweet forcing Amazon to do something similar to them.

Gautham further revealed that he got back the amount he paid for the lotion as well through one of his reply to a commenter.

If it makes you feel any better, the skin lotion was refunded!! 😂

One of a twitter user asked Gautam to send the link of the skin lotion to get free ear buds and another user wrote “I ordered amla juice two days ago. I receive amla juice only!! @amazonIN what is this behaviour?” which tickled the laughing bones of his fellow twitter users.

A new marketing strategy in the making!

Done! Bring along a bottle of Ardbeg to celebrate the exchange 🙂

I ordered amla juice two days ago. I receive amla juice only!! @amazonIN what is this behaviour?

Congratulations. I had a similar experience as well. The bounty wasn't in the same league as yours though. 😊 https://t.co/3DWO8xRdZB

A few years ago @ayush_gondole and I received a Go Pro Hero 4 from Amazon.
I don't even remember what was ordered originally. 😂
That shit costs 45k bruh. Called support many times but they never showed up.

Guess a Go Pro doesn't automatically make you an adventurer…

Similar incident here, ordered a product worth 2.1k but got this shampoo bottle and coconut water. Refund was processed though. 😔😔 pic.twitter.com/gcRxtqRF6o

Have you ever experienced something similar to this ?? Let us know !!