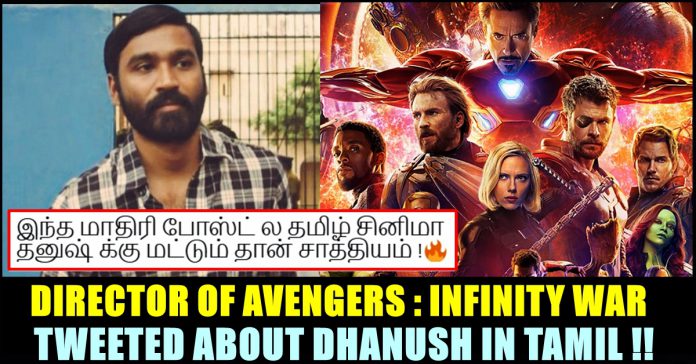 Promotions for “Jagame Thanthiram”, the upcoming film of Tamil actor Dhanush are in full swing. Director Karthick Subbaraj has been attending interviews and Netflix India which bought the film is extremely busy promoting it through their frequent social media posts and campaigns for the film which is getting released on Friday at 12 30 PM. Now, the official twitter account of Russo Brothers, makers of four films in the Marvel Cinematic Universe, has tweeted about the film and fans of actor Dhanush couldn’t keep calm.

Trailer of “Jagame Thanthiram” released recently in youtube and garnered huge reception from the fans. The film which is touted to be a gangster flick, created much anticipations from fans as it was director by new gen filmmaker Karthik Subbaraj who is very much known for his intriguing screenplays and unexpected climax twists. The film marks his fifth directorial and the music was composed by Santhosh Narayanan.

After so much expectations about the film’s theatrical release, the film was sold to Netflix due to the COVID 19 pandemic. It was announced that the film will be released on 18th of June after so many postpones. As a part of the film’s promotion, Dhanush made his presence in Twitter space. Now, makers of Avengers “Russo Brothers” came in to the scene to promote the film. It is notable that they are directing Dhanush in “Grey Man”, one of the upcoming project which exclusively being made for Netflix.

The most interesting part is, Russo Brothers talked in Tamil by uttering a dialogue from the trailer of “Jagame Thanthiram”. They tagged Karthik Subbaraj, Dhanush and Sashi’s Y not studios by sharing the film’s trailer to get the attention of the global audience. “Super da thambi! Excited to be working with
@dhanushkraja and good luck with #JagameThandhiram @karthiksubbaraj @StudiosYNot” read the tweet of Russo Brothers.

Replying to the tweet, Dhanush said “Thank you so much. That’s very sweet of you. Means a lot to me.”

Thank you so much. That’s very sweet of you. Means a lot to me. https://t.co/SraBgHztgr

Wow…Thanks so much ANNAs🙏🏼

Its dream for all actors 🙂

Shanthanu's nature of being very much interactive with his followers in Twitter made him to reply to a twitter user who spewed unnecessary hatred...

Mirchi Shiva Openly Trolls All The Music Directors Of Tamil Cinema In His Very Own Style !! : HILARIOUS !!