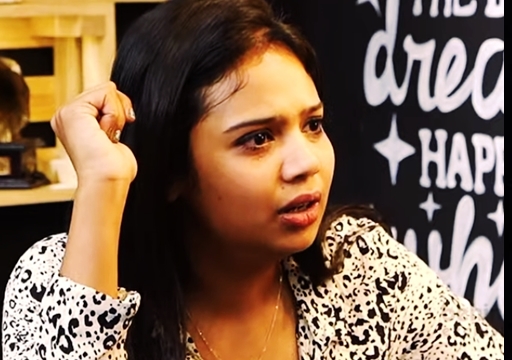 TV Star Sreenithi Opened About The Trauma She Went Through After Her “Valimai” Review!! WATCH

Television star and online influencer Sreenithi opened about what she went through after opining her views about Ajith kumar starrer “Valimai” to a YouTube channel in a theatre premises after watching the film on the first day of it’s release. Sreenithi said that the fans of actor Ajith kumar abused her through their comments in social media platforms and also confirmed that it was not the sole reason for her depression.

For past few days, Instagram timeline of the emerging star is filled emotional posts that showed herself crying and exposing the brusies in her body. Sreenithi is known for appearing as a child artist in a Vijay TV serial named “7 C” which was made of children. She also worked majorly in Zee television.

On the release day of “Valimai”, while giving interview to a YouTube channel about her opinion on the film, Sreenithi, after saying that the film was good, added “I can watch Ajith sir in any medium I want but to watch “Valimai”, lot of patience needed. I don’t have that”

“The film is terrible. Bike keeps running throughout the film but the film’s screenplay is not. Ajith sir did well” she further said.

Sreenithi faced lot of hatred from the fans for her comment in the public review about “Valimai” movie. Now, talking to Behindwoods about the comments dropped by the fans of actor Ajith kumar, Sreenithi said “I went to watch “Valimai” only because my friend acted in it”

“I decided to give my opinion to the YouTube channel only after he invited me more than one time. Being an anchor myself, I couldn’t refuse giving my bit like others. Though I pointed out the positives of the film initially, they asked me about the film. I can only tell how the film was, right?” said Sreenithi.

“What crime I committed to deserve such words. You guys are trending hashtags for a rape victim and forgetting about her two days later and giving rape threats to someone who opined her view about a film??” Sreenithi vented her emotion out.

Further, in the interview, Sreenithi opened about the real reason behind her depression. The emerging star said that due to her mother’s activities and the excess amount of love she is receiving from her, caused her the depression and bruises.