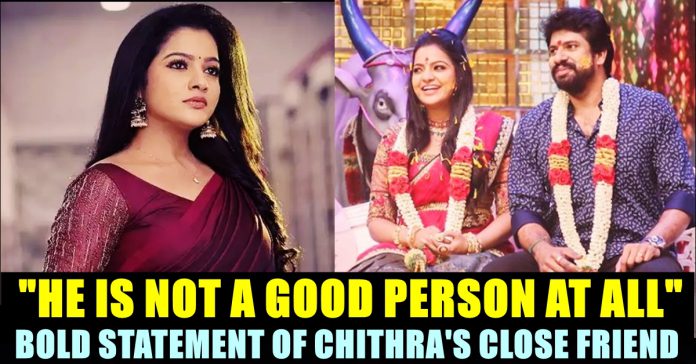 Rekha Nair, a close friend of VJ Chithu has appeared in an interaction with a popular youtube channel and stated bold opinions regarding the demise of the “Pandiyan Stores” actress. She who stated that Chithra’s “would be” is not a good person, said that she has a strong doubt on whether it is a suicide or murder. “It doesn’t looks like a suicide to me but someone must have inducted her to commit suicide” Rekha said.

Latest reports had said that the post mortem of Chithra’s body has been initiated in Kilpauk government hospital. Reports also suggested that the Whatsapp conversations of Chithra are being checked as a part of the investigation.

Now, talking about her partner Hemnath with whom Chithra got engaged recently, Rekha Nair had said that he could be the reason behind the decision of Chithra. She said that Chithra was looking tensed for past six months and always kept herself busy with video calls and audio calls.

“As soon as seeing the engagement pictures of her, I immediately thought that Chithra had made a poor decision in choosing her partner. I tried to convey it directly and through mutual friends.” said Rekha who disclosed that she know about Hemnath before he got engaged to Chithra.

“I know about him already. I know about his circle, his background and everything. To be frank, he is not a good person. Half of the girls in the Chennai city would have known him. He might cause problem for me after seeing this video but I don’t want such people to emerge” Rekha said in the video.

“He would go to almost all the pubs and would attend almost all the parties. Chithra also know about his bad character. But I don’t know why she decided to marry him. We advised her several times to think about it. I don’t think it is a suicide but someone had inducted her to commit suicide” Rekha said.

However Rekha said that no one couldn’t accuse someone for a murder just like that. “Let the result of post mortem come and let us wait for the police to investigate the case by searching her mobile phone and all. If the police investigates the case properly, many girls would be saved is what I believe” Rekha said.

After finding her body in the star hotel she was staying with her fiance Hemnath, Chithra was admitted in a nearby government hospital where she was declared dead by the doctors. In the preliminary investigation, it has been reported that the cause of Chithra’s death was suicide as the bathroom door was locked from inside. However, the results of post mortem is awaited.