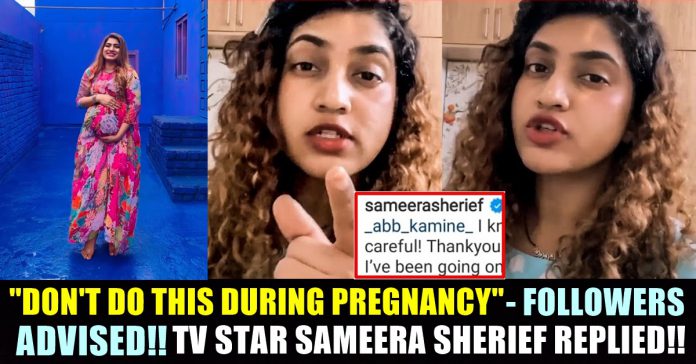 Sameera Sherief has posted a video on Instagram recently. This video has made few people advise her to be careful. However, Sameera has given replies telling them that she is aware of what she doing.

Sameera Sherief is a television soap actress. She is an actress and a producer. Sameera has acted in the lead role in two Tamil serials Pagal Nilavu and Rekka Katti Parakkuthu Manasu. She has predominantly appeared in Telugu serials. She participated as a contestant in Mr & Mrs. Chinnathirai-Season 2.

Sameera married Syed Anwar Ahmed. The couple acted as one of the lead pairs in the Vijay Television serial Pagal Nilavu. However, the pair walked out of the serial due to the differences with the team. The couple tied the knot in 2019. Sameera currently runs a youtube channel under her name and posts vlogs.

The couple has announced their pregnancy in April 2021. Since then Sameera has been flaunting her pregnancy bumps. She has also posted her maternity shoots and fun videos. Many people have been supporting her throughout this period. However, some people have come with hate comments.

In a recent Instagram Reels Sameera is seen making some dance movements.

An Instagram follower has commented, “I actually cannot wait for u to give birth so that these videos can finally end. u look beautiful tho but lmfaoooo”

To this Sameera has politely given a reply in her own way, like always.

A follower has asked her to be safe as she is in the final stages of her pregnancy.

To this Sameera has replied, “I know when to be careful! Thank you for your advice! I’ve been going on regular checkups. N I know my baby better! Thank u”

Many people have complimented Sameera on this reels.

Previous articleShruti Haasan Reacted To Her Old Photo Shoot Pictures!!
Next articleTamil nadu BJP Leader Annamalai Reacts To This Poster Made By His Followers !!