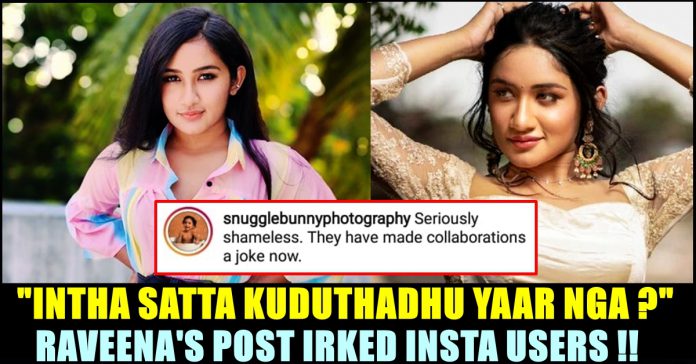 Actress Raveena Daha who is widely known among Television and Internet audience through her appearance as a lead in a serial named “Mowna Raagam 2”, is pretty much active in social media platforms such as Instagram, Twitter etc. She is currently enjoying 5 lakh plus followers in the photo/video posting social media application by uploading 400 plus posts. The 17 year old is actively involved in promoting brands through her Instagram posts.

Most recently, a story uploaded by Raveena on inquiring about the owners of a cloth she was wearing has irked a number of Instagram users, including Jason Samuels who recently exposed a number of Television celebrities after they failed to endorse the products they were supposed to do. In this digital era, marketing products through the social media accounts of celebrities with highest number of followers, became one of the most efficient ways of selling products.

The celebrities or Instagram influencer who accepts to collaborate with a brand, are supposed to upload a photo, story or video endorsing the product within the given period of time span. They charge different payments based on each brand and according to the product they are advertising. It has been reported that celebrities, apart from receiving the payment, are also end up owning the particular product they receive from the brand to advertise.

On Friday, Raveena uploaded a picture of herself wearing a shirt and asked who gave it to her. “Who gave this shirt to me ? Kindly do DM, I don’t know who gave it to me” Raveena said through her story by adding “laughing” and “thinking” emojis.. Here’s the screen shot of it :

Reacting to this post, Jason Samuels who felt that it is a disrespectful act towards a small business, uploaded the picture of it and wrote “This is how you should ask when you forgot which small business sent you their priced goods to you. How happy were you when you added the 😂😂😂 emoji to your story belittling them ? Or is it sarcasm ? Or should we take it as stupidity ? This is blatant disrespect to people who try to sign something with you ?” as his caption.

Many other users of Instagram came up with reactions, condemning the actress for demeaning a small business vendor. “Seriously shameless. They have made collaborations a joke now” a user said whereas another one wrote “Someone’s business has became a joke for these so called Influencers 😡😡”

Now, Raveena who managed to find the owner of the shirt, tagged them in the recent posts of her.

Sharing these posts of her, Samuels condemned the actress for not expressing any kind of regret. “Egoistic highly narcissistic individuals” he said in his story to express his emotions over the gestures of the actress while promoting a brand.

Previous articleActress Condemned Vishal After Seeing His Tweet On PSBB Issue !!
Next article“Think Before Using Words Like NONSENSE, STUPID OR IDIOT” – Ravi Ashwin Replied To A Fan !!