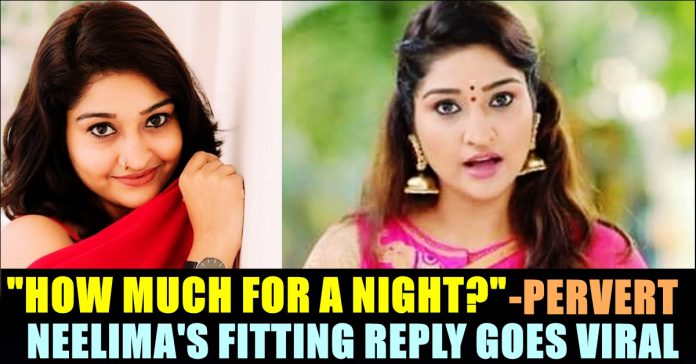 Celebrities especially those who belongs to Cinema and Television industry are easily targeted by offenders who would throw shades at them for their temporary happiness. Despite of several warnings and schoolings from high profile celebrities, trollers and abusers in social media are involving in posting sexist remarks against women in daily basis.

Conducting chat session with their followers is something stars would love to do. Amidst the COVID 19 situation, most of the stars, instead of meeting them person, interacting with them through social media platforms. Most recently, TV actress Neelima who is known for acting in several films and serials conducted a chat session with her two lakh ninety six thousand followers.

She answered to many of their questions which were based on her professional career. Meanwhile, a miscreant asked an inappropriate question writing “How much for a night” with vulgar emojis. Neelima, without losing her nerves, replied to him in a humble yet powerful manner. “I expect some decency brother ! God bless you ! Abusing people is a pervert’s mind, please visit a psychologist ! You need help” her reply read.

A caring follower of the actress, requested her to expose the Instagram identity of the pervert. Neelima, However, denied to give it and said that it’s her decency. “Avanoda ID mattum sollunga” asked the angry fan and Neelima replied writing “That’s my decency bro” with a smiling emoji.

Check out some of the other answers Neelima provided to her fans :

Comment your views on these replies of the actress !!

Previous articleKamal Degraded Ramya’s Character In The Weekend Episode ??
Next article“Aari & Sanam Will Be My True Friends” – Anitha Sampath Opened

Ahead of the 73rd birthday of Late chief minister J. Jayalalithaa, marriage ceremonies were conducted for 123 couple with ADMK offering 73 set of...