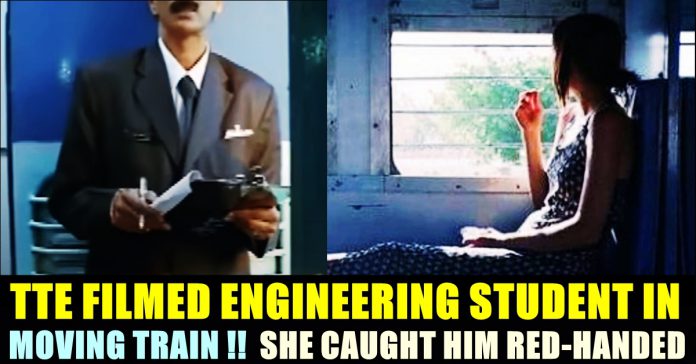 A travelling ticket examiner named as S Meganathan from Sooramangalam of Salem city has been caught red handed by the passengers after filming a woman in running train while she was using restroom. The 26 year old’s cell phone was checked by the passengers after he got caught and it has been revealed that he recorded so many women in the past. He was arrested by the railway police in the next station.

The victim, a student in a private Engineering college in Coimbatore, was travelling to Chennai when the incident took place. Meganathan has been using his mobile phone to record women inside the restroom by placing the camera near the window pane of the restroom, reports said. On Thursday, when the victim went to relieve herself in the train’s restroom, she saw someone recording her with cell phone from the window.

Traumatized with what she just witnessed, the victim rushed out of the restroom and informed other passengers about it. With the help of them, she confronted the TTE and took his phone from him forcibly only to find out several other videos and photos of many other women using restroom.

He was used to stand near the footboard of running trains and recorded the videos of women using restrooms by placing the camera near the window. When train stopped at the next station, she complained against the TTE to the railway police by accusing him of filming her through the window.

Meghanathan was booked under sections 354-c (voyeurism) and 354 -D (stalking) of Indian Penal code. Section 4 (Penalty for harassment of woman) of the Tamil nadu prohibition of Harassment of women act, 1998 and sections 66-B ( punishment for dishonesty receiving stolen communication device) and 67 (punishment for publishing or transmitting obscene material in electronic form) of the Information technology act, 2000 and arrested by the Arakkonam railway police.

A Magistrate in Arakkonam remanded him in judicial custody when he was produced in front of him by the Police. The incident created huge outrage in social media platforms where public are demanding the highest possible punishment for the culprit.