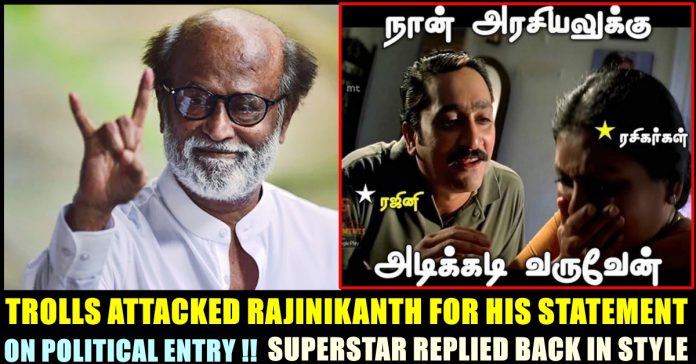 Trolls started flooding in social media platfirms against Superstar Rajinikanth after his recent press meet in which he talked about his political entry. The “Kaala” actor said that he is going to discuss with the administrators of Rajini Makkal Mandram whether to make his entry in the Tamil nadu politics in the future or not. The actor said that he couldn’t meet his fans and members of Rajini Makkal Mandran due to the shooting of “Annaththe”, COVID 19 pandemic and his visit to the United states regarding his regular health check up. Rajinikanth believed that there is still a question exists among public on his political entry and said that he will address the media after discussing with the members of RMM.

On 29th of December 2020, Rajinikanth released a press note saying that he is not going to enter politics due to the spread of the COVID 19 virus and due to his health issues. The actor released a press note saying that he will involve himself in doing good to people by not participating in the electoral politics. He took the decision after “Annaththe” shooting got intervened due to four people tested positive for COVID 19 virus.

“I can’t make the revolution by just campaigning my party through social media platforms and media. Just a shooting that consisted 120 people made me to get hospitalized for 3 days. I have to meet lakhs and lakhs of people if I start a political party” Rajini said in his tweet who believed that it will cause financial and mental stress to the people who belong to his party. “I don’t want to make my believers scapegoat to prove that I am a man of my word. So I am announcing that I will not be starting a political party with grief. The pain I suffered while announcing this could be felt only by me” the Superstar actor said at that time.

Now, months after the announcement, Rajinikanth appeared in front of the press and said that he is going to discuss about his political entry. “I couldn’t meet my fans or the administrators of Makkal Mandram due to the hectic shooting schedule of Annaththe, Election, COVID 19 pandemic and my USA visit. Now, questions on whether to continue Makkal Mandram or not, What’s the role of it are doing rounds among the administrators and fans. My entry into the politics in the future also exists. I will discuss about it to the administrators and would inform you” said Rajinikanth in the press meet.

As soon as the statement emerged from Rajinikanth, trolls started flooding in social media platforms against him based on his last statement about his political entry. Many believed that Rajinikanth is using his political career to promote his films with several others trolling his fans for still believing him.

Even Messi got international trophy and
Valimai got update .

But still rajini is giving baits about his political entry .

Blame it on the fans…. They should get some sense at some point in time. This cult worship culture has spoilt TN already. This only goes on to prove stupidity in fans. If they have any shame left they wudnt play into this theatrics. https://t.co/Me4NZwVpE5

PR companies spend crores on marketing a movie, should learn from Rajinikanth.
With one sentence he has been churning BO hits since the 90’s.

“So I am announcing that we are dismantling Rajinikanth Makkal mandram and it will remain as Rajinikanth Fans club and will continue serve people’s welfare” said Rajinikanth in his press note.

Previous articleGoogle Stock Images Were Used In “VALIMAI” Motion Poster ??
Next articleThalapathy Vijay’s Strategy To Eat Non-Veg 7 Days In A Week !! MUST WATCH