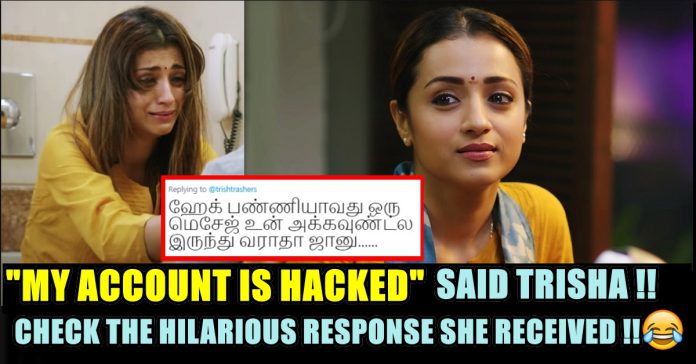 Trisha Krishnan known  as Trisha, is an Indian film actress and model, who primarily works in South Indian films,  where she has established herself as a leading actress. She was noticed after winning several beauty pageants like the Miss Madras contest, which marked her entry into filmdom.

After appearing in a supporting role in the 1999 Tamil film Jodi, she had her first lead role in the 2002 film Mounam Pesiyadhe. She later rose to fame starring in the successful films, Saamy and Ghilli in Tamil cinema. She gained more fans from Tamilnadu by pairing up with leading stars like Ajith and Vijay. She paired up with almost every leading heroes of Tamilcinema including Kamal Haasan. Now she is appearing in Rajinkanth’s upcoming film Petta as well. The actress wrote “Think my account is hacked guys. .Pls dont respond to any messages from me from my inbox .”

Think my account is hacked guys. .Pls dont respond to any messages from me from my inbox .

On seeing this tweet her followers made extreme fun out of it as they are longing for a single message from their favourite actress. Check out some of the selected comments she received for her tweet :

How many times ul tell😡😡😡

It is the spirit inside u that keeps hacking the account. You have a dual personality.

It is the spirit inside u that keeps hacking the account. You have a dual personality.

As her career became dull after a series of flops, Trisha made her strong comeback through her most recent love drama 96. She’s the only Tamil heroine with maximum number of blockbuster hits in Tamil and Telugu and no actress has come anywhere close to her on it.  No one expected 96 to create the kind of hysteria it did! Says Trisha: “Honestly speaking even we didn’t expect it to (laughs) It’s too overwhelming, I really didn’t expect this to happen ever again in my career. Of course, I value it and cherish it but at the same time, it’s not something I take seriously because it happened on it’s own. It’s nice to see that all the hard work has paid off”