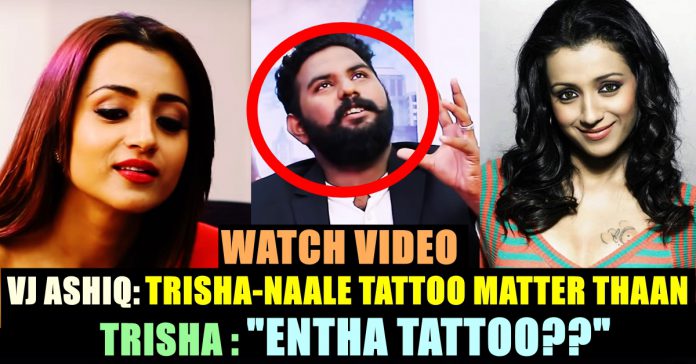 Trisha Reacts On The Growth Of Sivakarthikeyan !! WATCH

Now an old video interview of the actress to Galatta youtube channel is trending in facebook. In the video interaction with VJ Aashiq, she can be seen sharing about many of her experiences with her co-stars who are leading actors in Kollywood. When she was asked to rate the stars she worked with, Trisha gave 90 out of 100 for STR and 50 for Siddharth. When she was asked to rate Jayam Ravi, Vijay, Ajith kumar and Vijay Sethupathi, Trisha gave 80, 20, 80, 90 respectively. This irked the fans of actor Vijay as she gave the lowest mark to him, despite of acting with him in more number of movies.

Further Trisha gave her opinion about the reach of Sivakarthikeyan and defined it as pure growth. It is notable that Sivakarthikeyan performed mimicry in the presence of Trisha during his Vijay tv times. Watch the video here :

Further she went on to add many of her opinions about South Indian director Rajamouli and shared about her friendship with wife of actor Jayam Ravi. After that VJ Aashiq who thought of proceeding his next question said “Tattoo.. If I think of Trisha, Tattoo is the first thing that would strike in my mind” he said by having a picture in his mobile to which Trisha would ask “Which Tattoo you are talking about ? ”

Ashiq who showed a picture of Trisha’s tattoo in her back said “The one you had recently”. “This is a tattoo of film clap board and a camera stand.” Ashiq showed the picture and said to viewers saying “This tattoo man!!” most probably thinking that they would have imagined of another tattoo of Trisha which she will be having below her neck.

“Honestly, I love films and it is being with me consistently. That is the reason behind that Tattoo” Trisha explained. After that Trisha shared about the happiness she got when she was honoured with the UNICEF celebrity advocate status in this one year old video.

On the work front, Trisha who was last seen in Rajinikanth’s Petta, is expected to be seen in Raangi, Paramapatha Vilayattu, Ponniyin Selvan etc. Comment your views on these things shared by Trisha !!

Director/Actor Parthiban Shared His Whatsapp Chat With Thalapathy Vijay On His Birthday !! Check Out !!

Actor Vijay made his twitter account active after almost 8 months to make announcement about his upcoming movie's title and poster. Two massive posters...