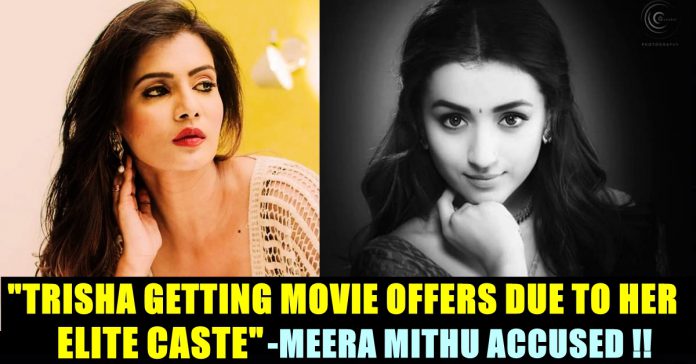 Meera Mitun who earlier alleged that Trisha is copying her fashion style, now came up with an allegation saying that she is getting opportunities in Tamil film industry because of her caste. The former Bigg Boss star who is known for her controversial allegations against high profile individuals in film industry, has been constantly posting tweets against Trisha alleging that she stopped her growth in film industry.

Meera Mitun says that her scenes from “Yennai Arinthaal” got deleted because of Trisha. She further accused Trisha by saying that she prevented her from acting in “Petta”. “This has not ended with Yennai Arindhal, Even after 7years Trisha ensured I was thrown out of #Petta. I ll reveal complete video tomorrow” Meera Mitun wrote in her tweet on Monday.

This has not ended with Yennai Arindhal, Even after 7years @trishtrashers ensured I was thrown out of #Petta. I ll reveal complete video tom 💯

Now, in a video, Meera Mitun came up with a shocking allegation saying that Trisha is getting opportunities in Kollywood because of her upper caste. “Years before when Jallikattu protest took place, you all accused Trisha for supporting PETA. Now, when I came up with a truth to accuse Trisha, you all blaming me and praising Trisha. Being a PETA member she could have saved many other animals which are suffering. But she stood only against Jallikattu. She didn’t ask apology as well, Her mother did it on behalf of her” said Meera Mithun in her video.

“The practice of Nepotism comes for casteism. Trisha gained her entry, survival and opportunities in Tamil film industry only through her father’s elite caste. You people even trolled me for my Periyar’s post. He fought against this casteism and nepotism. You people are praising Periyar but now see yourself whom your are supporting. As a follower of Periyar, I’m going to make a revolution on removing casteism and nepotism” she said.

Earlier, Meera, in her tweet said that she is going to warn Trisha for one last time for copying the features of her including hair. She accused Trisha for morphing her photos in photoshop to look like her. She threatened Trisha about a legal suite and asked her to Grow up and Get a life. “Tis s gonna be my last warning to you Trisha. Next time I see, you photoshop ur picture with features of mine including hair, morphing to, look like me, you will be under serious legal allegation . You know what ur doing, Well ur conscience knows. Grow Up! Get a Life.” read the tweet of Meera.

Tis s gonna be my last warning to you @trishtrashers. Next time I see, you photoshop ur picture with features of mine including hair, morphing to, look like me, you will be under serious legal allegation . You know what ur doing, Well ur conscience knows. Grow Up! Get a Life.

Meera Mitun accusing Trisha after accusing Director Cheran for physically assaulting her, Ulaganayagan Kamal haasan for nepotism, Superstar Rajinikanth for promoting himself during COVID 19 pandemic, actress Aishwarya Rajesh for copying her style, Directors Pandiraj, Naveen kumar for removing her from their films.

Previous articleStudent Commits Suicide After Losing Money In Online Game !!
Next articleArchana Chandhoke Replied To A Harsh Comment On Her Parenting !!