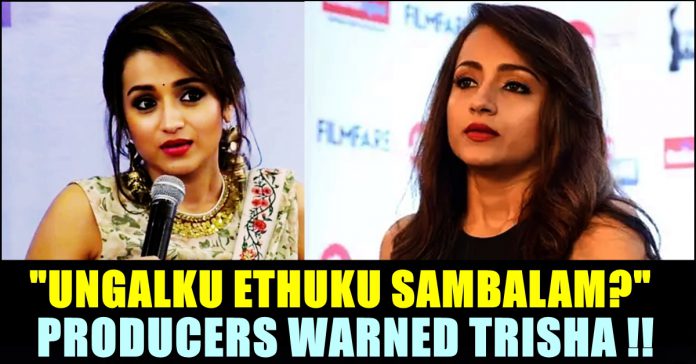 Trisha Got Slammed By Producers For This Reason !!

Now, actress Trisha who is considered as one of the most experienced actress of Tamil film industry failed to attend the promotional interview of her upcoming film “Paramapadha Vilayattu”. Producer of Maanadu Suresh Kamatchi and Amma Creations head T. Siva slammed the actress for not attending the event. What irked the producers more is, that the above mentioned film is a female oriented film and Trisha is the only known star in it.

In the event which took place in Sathyam cinemas, the producers expressed their disappointment over the actress. “Actors not attending the promotional events of their own films, has became a trend, nowadays. They think themselves as high profile actors after avoiding the promotional events. Generally, a film’s actors would be seen sitting in the front row of an event. But in this film, we who are the part of Producers council and Directors council are sitting here as friends. Even biggest stars such as Rajinikanth and Vijay are attending the audio launches of their films. I can’t figure what the problem is with these stars. The fame they got now is only because of the press reporters and fans. I don’t know what is their problem in meeting them.” Suresh Kamatchi lashed out at Trisha in the event.

“We commit stars like you only because of the fame you people are having. That is the only reason behind us paying you the amount you demand, or else we could have gone with new actors. You must realize that you have a minimum amount of responsibility to promote the film which is made of lot of money.” he added.

Comment your views on top actor failing to appear in the promotional interviews of their own movies !!

Previous articleSamantha’s Warning To Fan Who Misbehaved !! WATCH
Next articleA.R Rahman Got Frustrated For The First Time On Air !! WATCH

Followed by Rohini Silver screens which is located in Koyambedu, Krishnaveni Cinemas in T. Nagar also declared their winners for the first week. Krishnaveni...