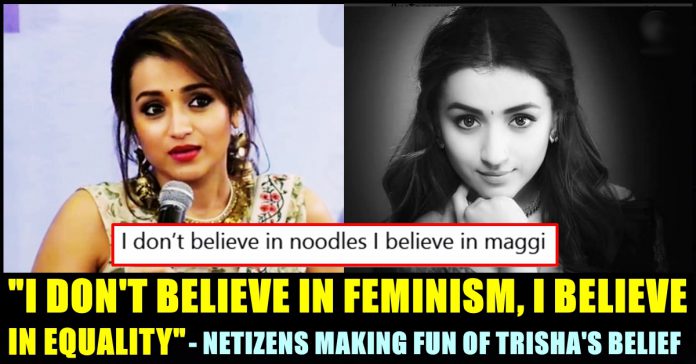 A three year old video of actress Trisha choosing “Equality” over “Feminism” got resurfaced in the micro blogging social media site with fans trolling the actress for parting Equality and Feminism as two different things. She made the statement in the year 2018 while doing promotion for one of her films named “Mohini”.

As we all know, the accepted definition of Feminism is nothing but “all genders having equal rights and opportunities”. The term is about respecting diverse women’s experiences, identities, knowledge and strengths by striving to empower all women to realize their full rights. However, in the interaction that took place in 2018, actress Trisha, when she was asked to describe “Feminism” in one line, said “I don’t believe in feminism, I believe in equality”

As soon as the video resurfaced in Twitter, trolls started flooding against the actress. “Ayo she doesn’t realise how stupid she sounds” a twitter user said after watching the video whereas another one said “People misunderstand the meaning of feminism. Feminism=Equality, If you support equality you’re feminist simple as that lol”

Ayo she doesn't realise how stupid she sounds 🫂 https://t.co/vOYEl05LYR

People misunderstand the meaning of feminism. Feminism=Equality🤷‍♂️If you support equality you're feminist simple as that lol. https://t.co/At9gltvA8E

I spat water and laughed so much https://t.co/bJgQ2INE4h

How to tell people you don't know what feminism is. https://t.co/hQ6RkHTBrn

Ps: used to my fav in childhood lol https://t.co/A6hCcjAsR4

Shame she use to be my childhood fav 😭😭😭😭 and the overconfidence written all over her face while saying this… I feel so embarassed pls 😭🚶🏽‍♀️ https://t.co/0G3876yCIp

as someone w my name , you shouldn't have said that. 😐 btw feminism is not about making women superior than men. but " I don't believe in feminism" ???? 🙄 https://t.co/SOgKQSyqXP

I’m not an atheist I just don’t believe in god 🤡 https://t.co/fB1lBbHZ8R

Mayyyybe she forgot to refer her dictionary that day.

Seriously @trishtrashers and many others? What's so cool about telling "Oh I'm not a feminist, feminism is a bad word". Don't undermine something coz u don't know what it means. 🤦 #Feminism https://t.co/aLs5eHiT8Y pic.twitter.com/rkVT481Koh

I don’t believe in noodles I believe in maggi https://t.co/YCfLOOiust

On the work front, the actress is expected to appear in the first part of “Ponniyin Selvan”, directed by Mani ratnam. Comment your views on this opinion of Trisha on feminism and the reactions it is receiving !!