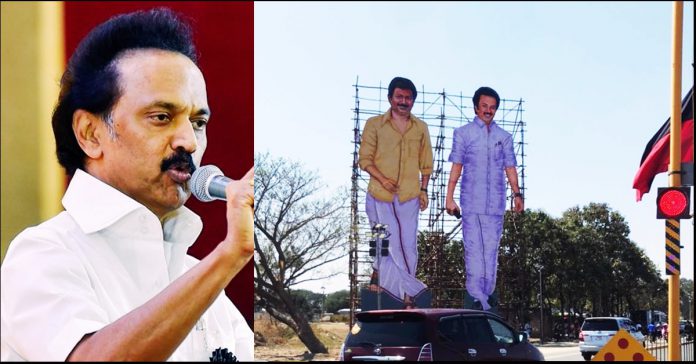 Now, party Dravida Munnetra Kazhagam has scheduled a rally in Trichy district and is expected to finalise seat-sharing talks with allies before the party’s massive public meeting in Trichy. Now, it has been reported that the important administrations of the party got upset on seeing a banner that was raised to celebrate the event.

The DMK party which got lost in the past two elections, is looking for all possible ways to win the elections. To grab votes from the public, the party members including leader M.K Stalin are campaigning for their party by visiting various places in the state. Now, as a rally has been planned in Trichy district, a cut out holding the pictures of M.K Stalin and his son Udhayanithi Stalin has left the important senior personalities of the party in a dejected state.

It is very well known that M.K Stalin started leading the party after the demise of former leaser M. Karunanithi. Now, the publiciies denoting Udhayanithi as the next leader has created a ruckus among the party members. This behaviour of the party members has been receiving severe criticism.

Previous articleKarthick Naren Planning To Do A Prequel For “Master” ??
Next articleKamal Took Indirect Jibe At DMK For Their Recent Announcement !!

Actress Hits Back At A Journalist Who Asked A Misogynistic Question About Her To Her Co-Star!!

In the trailer launch of upcoming Telugu film "DJ Tillu", actress Neha Shetty had to go through an embarrassment due to a question asked...