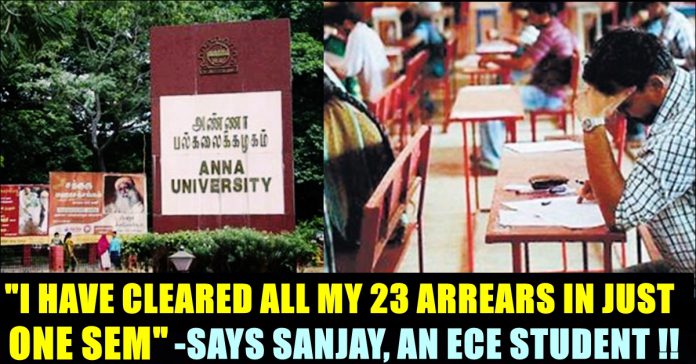 Due to the “all pass” announcement made by the Chief minister of Tamil nadu state, mixed reactions kept pouring in social media platforms for past few days. When former vice chancellor of Anna university E.Balagurusamy condemned the decision of Tamil nadu government by asking how could they pass students who have 10+ arrears and have scored less than 20% of marks in each subject just because they have paid the fees, students are celebrating him. Bizarrely, those who haven’t paid the Exam fees, demanded a grace period from the government in order to et pass without writing the exam.

Weeks ago chief minister Edappadi K Pazhaniswamy announced that the exams for college students will be cancelled due to the increase of numbers in COVID 19 positive cases in Tamilnadu and declared that the students who already paid fees for their examinations will be passed without writing their exams. While answering to reporters, he said that he made this decision considering the amount of depression and anxiety being faced by the students in this pandemic situation. When the press asked him whether this decision would gain him votes, the Chief minister, with a little bit of smile in his face, said that the question is unnecessary.

The announcement which was made on Wednesday is applicable for the students who were preparing to write arrear exams as well. However, final semester students must write their exams in order to get their degree. “The state government has already granted exemptions to students who were to appear for the regular exams” Chief minister Edappadi Pazhaniswamy said in his statement.

Among the many reports emerged regarding this after the announcement of the state’s chief minister, a recent report of Vikatan has a brought Trichy based student named as Sanjay to the limelight. The student has cleared 23 arrear papers with the help of the TN government’s decision.

Sanjay who belongs to Kirapatti of Trichy district, is a only son for his parents. After scoring a decent 427 marks and 905 marks in 10th and 12th standard respectively, Sanjay joined Electronics and communications engineering in an Engineering college.

“We used to by heart our lessons during school times to write exams. I couldn’t understand thing in Engineering. In the very first semester I got 6 arrears. However, I struggled a lot and cleared five of them. After writing the exams of second and third semester I got 5 arrears in each. In fourth semester, I failed in 6 exams, In fifth also I received 6 arrears which makes a total of 23 papers for me to clear with current subjects to get my graduation.” said Sanjay according to a report. “My friends would keep lamenting if they get one or two arrears. I left everything to god” he added.

“But I happened to face a big problem in my fourth year. They said that I have to clear all my arrears in the first year in order to study in the fourth year. If I fail to clear that one arrear I have in the first year, I will be forced to sit in a class with the juniors of 3rd year. I can’t o to the third year” Sanjay said.

“Then, I decided to clear my one arrear in the first year and went to pay the fees. They said that I can’t pay arrear exam fees to write just one exam and asked me to pay for all the 23 papers. Without having no choice left, I paid for all the 23 papers. God won’t let good people go off his hands. Now, chief minister has announced that I will be passed in all the exams as I have paid my fees. I have cleared all my papers” said an enthusiastic Sanjay, Vikatan report said.

The report further said that there is a big politics being played behind these kind of decisions from the state government. After seeing Chief minister Edappadi Pazhaniswami targetting the votes of students, DMK leader MK Stalin also joined the club by demanding “all pass” for the students who haven’t paid the Exam fees. It is very much evident in social media that Chief minister Edappadi Pazhaniswamy has already became a “Hero” among students and Stalin scored from students by demanding 100 % of “all pass” as well.