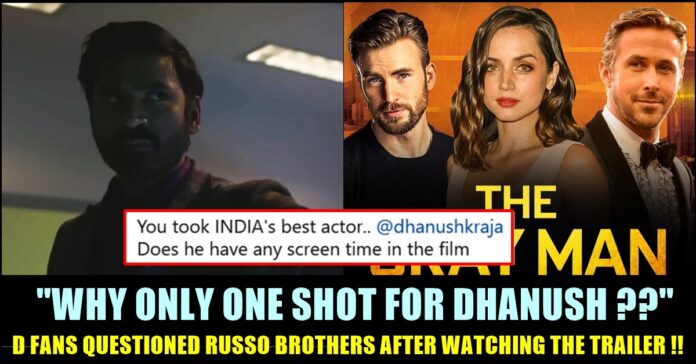 The much awaited trailer of “The Gray Man” released in internet on Tuesday evening with much expectations from fans. Directed by Russo brothers of “Avengers” fame, along with globally acclaimed stars Ryan Gosling, Ana De Armas and Chris Evans, actor Dhanush who is known for predominantly appearing in Tamil films, has played a pivotal roles and the Netflix project has special attention from Indian fans due to the presence of Dhanush. 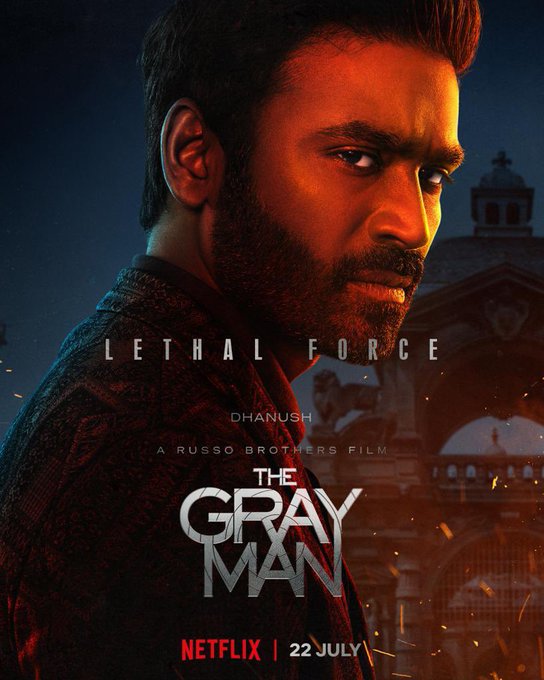 Now, as the trailer got released, many kind of reactions are being flooded in the internet related to Dhanush’s presence. Many seem to be worried about the screen presence of the national award winning actor as he barely appeared in the 2 minutes and 12 seconds long trailer.

The action packed trailer shows all the lead artists involving in fighting men with rage. It has been reported that Ryan plays the titular role “The Gray Man”. Chris Evans has played the role of his psychopathic adversary in the spy thriller. Based on the novel, ” The Gray Man”, the film is directed by Anthony and Joe Russo.

As soon as the trailer released, many of Indian fans who are waiting to witness the film only to witness Dhanush, expressed a little bit of their disappointment. Tweet of Russo brothers was filled with comments from Dhanush fans questioning about the weightage of his character.

“You took INDIA’s best actor.. @dhanushkraja Does he have any screen time in the film @Russo_Brothers ? “ a fan commented whereas another one said “Please, don’t make my man danush look like anil kapoor in mi5 or 4 please, that’s my only concern. I believe in your direction skills but it’s a big thing for us indians. Just saiyan!”. Many other fans of Dhanush commented saying that they are waiting for the movie only for Dhanush.

Please, don’t make my man danush look like anil kapoor in mi5 or 4 please, that’s my only concern. I believe in your direction skills but it’s a big thing for us indians. Just saiyan!

Am @dhanushkraja Sir Fan why are showing in single shot in trailer????

in trailer just a 3 or 4 sec @dhanushkraja coming.
if you add a dialog of @dhanushkraja may be View will going million with in 30min, its my concern. @netflix @NetflixIndia ☺️

You took INDIA’s best actor.. @dhanushkraja
Does he have any screen time in the film @Russo_Brothers ?
Waiting eagerly.❤🔥🤞

Make sure @dhanushkraja is fully there in the film and not 10 or less minutes ! If not @Russo_Brothers are going to lose a lot of fans!

sad to see no verbal context for Dhanush in the trailer

Previous article“Learn From Him” – Fans Advised Nelson & Vinoth After Watching This Video Of Lokesh Kanagaraj
Next articleOnline Users Questioned Dinamalar For Their Edit Of A Students Selfie !! Actress Defended

Sandy, Sherin, Kavin, Losliya, Tharshan were the five of the contestants among the six who got nominated for eviction this week. Kavin walked off...

Actor Sandhanam who is busy acting movies as a lead actor, in a recent promotional event of "Captain" movie of Arya, has said that...