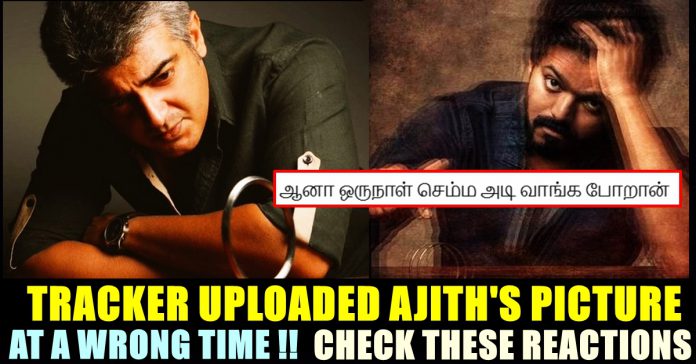 The most awaited first look poster of actor Vijay’s upcoming film released on 31st of December. The makers who tentatively titled the film as #Thalapathy64, revealed the original title as “Master”. Few months ago, the film commenced with a customary pooja in Chennai with Vijay, Vijay Sethupathi, Malavika Mohanan and Shanthanu Bhagyaraj and the rest of the crew in attendance. Directed by Lokesh Kanagaraj, the film is touted to be a gangster flick with Vijay Sethupathi playing the villain.

Lokesh Kanagaraj who is considered as one of the main faces in new age filmmaking is keen on selecting young talents as his crew for this film it seems. Music to be composed by Anirudh Ravichander, the film is bankrolled by Xavier Britto of XB Film Creators. Arjun Das who played the baddy in the director’s previous venture is the latest one to be added in the cast list of “Master”.

The titled impressed the fans and followers of Tamil cinema as it broke the stereotypes of first look posters. Unlike other first look posters of actor Vijay, this one didn’t give any idea about the plot or genre of the film. The “blurred” effect was added in a way to tell the fans that it is going to be a director’s movie more than the actor’s. Vijay was seen facing the audience with his sharp and intense eyes. Check out the first look here :

Actor Vijay is one of the very few actors who has huge fan following in South India. Having acted in more than 60+ films, he is in the top race to become the highest paid actor in Kollywood. In the film Master, Vijay is going to do a role of a lecturer, according to reports. It is also going to talk about the flaws in educational system and reports suggested that the death of NEET aspirat Anitha is also going to take place in the film according to sources.

As soon as the first look went viral among the Netizens, popular tracker Ramesh Bala who enjoys more than 4 lakh followers had posted a picture in his official twitter account. The first look of “Master” released exactly at 5 pm on the 31st of December whereas Ramesh Bala uploaded a poster of “Ennai Arinthaal” in which actor Ajith will be sitting in a similar pose of Vijay in “Master” at 5 : 21 pm.

This post from the tracker made the fans of actor Vijay extremely angry which is evident through their comments. Check out some of them below :

One of the worst existing creature https://t.co/27QRQSefz1

What do you think on these comments Ramesh is receiving ?? Comment your views below !!

Previous articleJoe Michael Got Arrested For Cyberstalking !!
Next articleVijay Is A Member Of Illuminati ?? Paari Saalan Decodes !!

Vanitha Vijayakumar Reacted To The Marriage Event Of Producer Ravinder ??

A tweet uploaded by actress Vanitha Vijayakumar on Monday is believed by her followers to be a reaction of her to the marriage event...