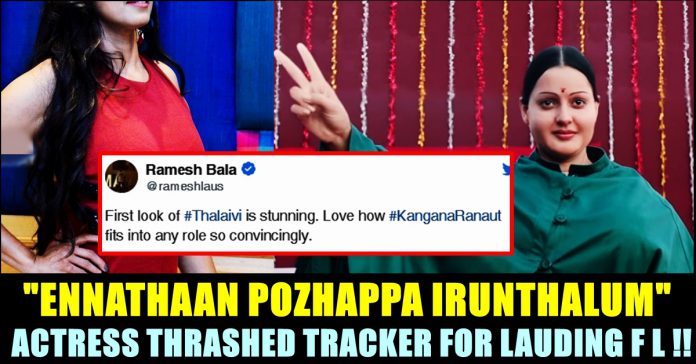 The first look of “Thalaivi” starring Kangana Ranaut released a couple of days earlier. Kangana Ranaut is known among Tamil audience in the movie “Dhaam Dhoom” where she played opposite to “Jayam” Ravi as female lead. Many excited to see the actress playing the role of one of the powerful chief ministers of state Tamilnadu.

As soon as the teaser and First look of “Thalaivi” released, entire Internet came up with opinions about which actress should have done the role of Kangana Ranaut as they did not impress the fans in big time.

It looked more like an animation character and many of the twitter users who saw the teaser neither felt Kangana nor Jayalalitha in the teaser. They started making fun of both teaser and first look as it does not compete with the reality as far as the looks of the lead is concerned.

When the entire Internet is complaining about it, one of the prominent movie tracker of Kollywood Ramesh Bala shared the first look picture and wrote “First look of #Thalaivi is stunning. Love how #KanganaRanaut fits into any role so convincingly.”

First look of #Thalaivi is stunning. Love how #KanganaRanaut fits into any role so convincingly. pic.twitter.com/dxySnlZsic

This tweet from the tracker gained him so much trolls from his own followers but the most special one came from actress Kasthuri who is very much known for her bold statements in social media platforms. The actress and Bigg Boss contestant, in her reply wrote “ennathaan pozhappunnaalum oru manasatchiye kidayatha?” which roughly means “Though it is your job, don’t you have a heart?”

Many endorsed the tweet of Kasthuri as they felt the same. Check out some of their reactions here :

What do you think on thsi reply from Kasthuri ?/ Comment your views below !!