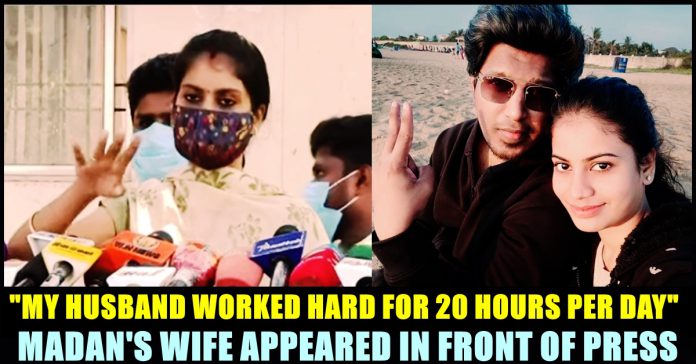 Youtuber Madan’s wife Krithika appeared in front of press reporters, defending her husband who is in jail for using abusive words against women in a public forum. On Tuesday, it was reported that Goondas act has been charged against the youtuber. As a result of it, the accused’s wife Krithika who went to Commissioner office, met press reporters and defended the activities of her husband. She said that negativity is being spread against her husband who earned money through working 20 hours per day for his youtube channel.

“I am talking here only to brush off the negativities that are being spread against my husband. He never played the Chinese version of PUBG which is banned in India. He only plays the Korean version of the game” Krithika said in the press meet. “They are saying that 150 cases and 200 cases were filed against my husband. While going through it, me and my lawyer found that it is only four people who are complaining against him from various places” she further says.

“He has been playing PUBG for past three years and we never bought a property in the last 10 years. They say that we own two bungalows.” said Krithika who added that they never bought a “luxurious” car but only owning a Audi A6, worth of which is Rs. 60-70 lakh in India. “We are living in a rental house. He is working 20 hours a day and generating income from youtube and Super chat. Now, they have blocked the channel and he couldn’t do anything. Our livelihood has been affected as Police had confiscated even our house key” she could be seen saying in the press meet.

“I came to meet commissioner in person to ask him about the 200 people who made teh complaint against him.” Krithika said. “Not single proof have been produced against him so far” said Krithika and added that her husband used bad words only because four people triggered him continuously through the comment section.

Watch the press meet of Krithika below :

“I was never involved with the youtube channel and my bank account which my husband used for it is the only connection between me and the youtube channel. After Krithika denied almost all the accusations against Madan, a reported asked her whether Chennai Police filed a fake case against them. Krithika, without responding to him, left the press meet mid way.

Madan Manickam who is popularly known as “Toxic” Madan or Madan OP, got arrested by a special team of police at Dharmapuri, weeks ago. He was accused of degrading women through his youtube videos by using obscene language. It was reported that Krithika, wife of Madan who helped him in uploading videos got arrested and has been released in bail. Earlier, It was reported that Krithika assisted Madan in committing various kind of crimes, most importantly, she often pretended as a stranger and chatted with Madan on live to attract more children. However, in the recent press meet, she denied such accusations and asked people to produce proof for it.

There has been a new twist in the case of Dhashvanth,  the alleged accused in the murder case of Hasini,  the 7 year old...

From Sachin Tendulkar To Rahul Gandhi, Entire Country Comes In To Support “Shami” After The Loss !!

After India lost the match against Pakistan, Indian pacer Mohammed Shami has been facing the wrath of fans and a number of cricket fans....

Baradwaj Rangan is known for his show, The BR Review on a YouTube channel. In the show, he reviews all the new releases. He...

Hashtag “Myna” Is Trending With “Vikraman” In Internet!! Check Why

Hashtag "Myna" is trending in the micro blogging social media site after a video of herself confronting her fellow contestant Vikraman during one of...