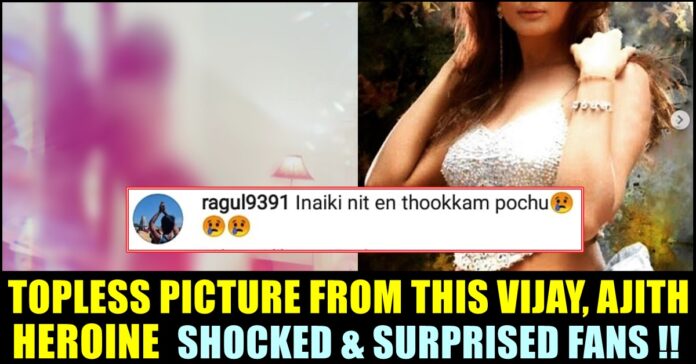 A recent post uploaded by actress Kiran who is known for sharing screen space with both Ajith and Vijay during her prime, shocked fans. In the post, the actress was seen posing with her “love handle” leaning on a mirror with a caption that said she doesn’t know why people call those “back folds” instead of “love handles”. Amidst the dirty comments that surfaced for her post, many fans got shocked and surprised at the same time on seeing the post from the former actress.

Kiran debuted to Tamil film industry through Vikram’s 2001 flick Gemini. In the film she appeared as a Tamil speaking north Indian girl and impressed the Tamil audience in big time. After that, she acted in Ajith Kumar’s Villain and in Kamal Haasan’s “Anbe Sivam”. She also performed in an item number with actor Vijay in a film named “Thirumalai”. Within a very short span of time, the actress shot to fame by pairing up with Kollywood’s top actors such as Vikram, Kamal and Ajith. She was last seen as a character artist in films such as “Aambala” and “Muthina Kathirikkai” of Sundar C.

On Friday, the actress came up with a picture of herself wearing only the undergarment and she was seen leaning onto her mirror. “Don’t know why people ca those back folds, #love handles. Can’t get rid of them ever” read the caption of the actress’s post.

Check out some of the reactions the actress post garnered below :

Being a Jaipur born, Kiran is a cousin of acclaimed actress Raveena Tandon who recently caught eyes through her performance as a Prime Minister in “KGF 2”. On the work front, the 41 year old actress is expected to be seen in Santhanam’s “Server Sundharam” next which is awaiting for the release for a long time.

Meet The Man Behind The Voice Of “Rocky Bhai”!!

Video of dubbing artist Sekar P. R who dubbed for Kannada actor Yash in the Tamil version of KGF, uttering the dialogues from KGF...