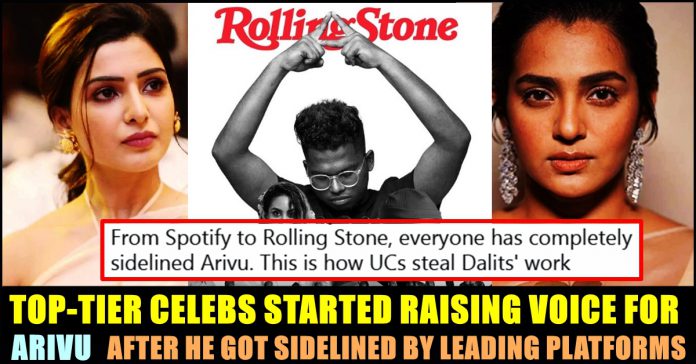 After Pa. Ranjith, C.S Amudhan and many other known personalities, top tier heroines such as Samantha Ruth Prabhu, Parvathy Thiruvothu came up with social media posts, raising voice for Arivu, a rapper, lyricist and a performer. The recent cover picture of the “Rolling Stone” magazine became a subject to controversy after it abandoned Arivu who wrote lyrics for both “Enjoy Enjaami” and “Neeye Oli”. Despite, the official twitter account of “Rolling Stone” added a tweet honouring Arivu after the outrage, people still expressing their displeasure over the cover picture.

August 2021 cover of Rolling Stone Magazine which promotes the Independent music videos “Enjoy Enjaami” and “Neeye Oli” grabbed headlines after the authorities of the magazine decided not to use the picture of Arivu, the lyricist who wrote lyrics for both the songs. Along with director Pa. Ranjith, many people who became aware of the magazine’s cover has been calling out “Rolling Stone” through their tweets and reactions.

Along with singer Dhee, the magazine cover included Shan Vincent De Paul, a Canadian recording artist who worked in “Neeye Oli”. On seeing the cover, influential filmmaker Pa. Ranjith came up with a tweet condemning “Rolling Stone” and “Maajja”, an A.R Rahman backed music platform for failing to credit Arivu, a performer, lyricist, singer and rapper who worked in both the projects. It has been reported that “Rolling Stone” has interviewed Dhee and Shan before featuring them in their August cover.

.@talktodhee and @shanvdp appear on our August 2021 cover. The triumphant South Asian artists have been at the front of erasing border lines with songs like "Enjoy Enjaami" and "Neeye Oli" respectively, released via platform and label @joinmaajja

Arivu who rose to fame among Internet audience through his presence in “Enjoy Enjaami” and anti-caste lyrics, didn’t get featured in the magazine’s cover. He penned lyrics for “Enjoy Enjaami” and worked with Shan on writing the lyrics “Neeye Oli”. The entire cover story consisted a small quote of “Arivu” with no space for him in the cover image.

Calling out the magazine, Pa. Ranjith, in his tweet wrote “Arivu, the lyricist of #Neeyaoli and singer as well as lyricist of #enjoyenjami has once again been invisiblised. @RollingStoneIN and @joinmaajja is it so difficult to understand that the lyrics of both songs challenges this erasure of public acknowledgement?” to express his displeasure over the cover image.

@TherukuralArivu, the lyricist of #Neeyaoli and singer as well as lyricist of #enjoyenjami has once again been invisiblised. @RollingStoneIN and @joinmaajja is it so difficult to understand that the lyrics of both songs challenges this erasure of public acknowledgement? https://t.co/jqLjfS9nwY

With many other celebrities condemned the cover being published without Arivu’s image, an Instagram user named Sreejithpa made a design highlighting Arivu and included Dhee, Shan in it. “There. Fixed it.” he wrote as his caption for his post and tagged the official Instagram handle of Rolling stone.

The post was shared by Samantha, Parvathy and many other users of the photo/video posting social media app.

Parvathy tagged Arivu in her story.

Check out some of the other tweets that surfaced supporting the emerging artist :

– @RollingStoneIN Arivu should have been a part of this cover more than anybody else. the song enjoy enjaami is about his anti-caste struggles. Rolling Stone covers issues of racial diversity extensively in the USA, but invisibilizes marginalised voices in India. fix it! pic.twitter.com/ApA4kDHCvk

Erasing what now? Idk how many times ppl will have to point this out. Shouldn't Arivu be on the cover too? Enjoy Enjami is his song, his politics, his history. https://t.co/ZZSyG90R8T

If the @TherukuralArivu erasure wasn’t a deliberate & blatant move, Dhee, @Music_Santhosh & @arrahman should speak up, otherwise it will go down as a historical injustice.These are people we believe are on the right side of the good fight,I really hope they do the right thing.

The discussion on Arivu’s treatment isn’t a triviality, nor ‘taking it away from music.’
I truly hope Arivu at least had a contract in place, got paid his due as a creator and is getting the royalties for the insane hits on Enjoy Enjaami and Neeye Oli.

Arivu is the singer & writer of Enjoy Enjaami, yet he has been erased everywhere. The song is about the life of Arivu's Dalit ancestors, yet Dhee has stolen all the credit. From Spotify to Rolling Stone, everyone has completely sidelined Arivu. This is how UCs steal Dalits' work pic.twitter.com/hxGZ2arCk1

I don't think anyone can neglect or ignore arivu anymore !!

Funniest part is, the entire song is arivu’s intellectual property. Yes you helped bring it to light and it brought tamil music to a global level but at what cost? ffs irony ku oru ella venama

After witnessing the episode that got streamed on Wednesday, a number of online users thrashed Amir and Raju who broke the eggs of Thamarai...

Not many days ago, the issue of Pollachi rape and blackmailing case became the subject of talking point in state Tamilnadu. Now to our...

The journey of “96” the film will break your hearts a hundred times over, leaving you alternately comforted and pained as nostalgia washes over....