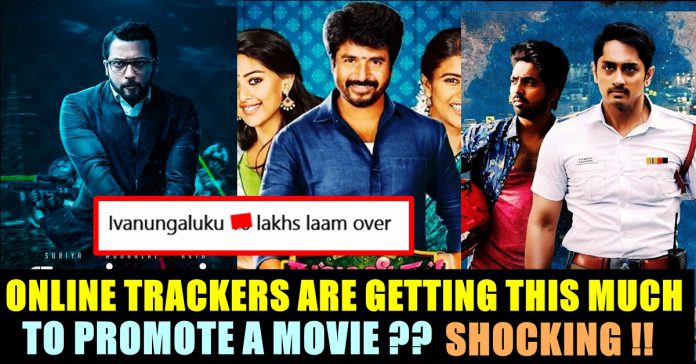 Movie promoting in digital media became mandatory as the users of social media are increasing day by day. Movie watching audience are highly influenced by online reviewers nowadays. Starting from high budget movies such as 2.0 to single room drama Oththa Seruppu, every movie requires promotion and production houses allot a separate amount of money for promotion alone which we all know.

Now Balaji Gopal who worked as colorist in highly appreciated films such as Super Deluxe, Sindhubadh has revealed that a sum of 10 lakh rupees has been spent on online reviewers and trackers by production houses in order to promote their movies.

In his tweet Balaji who believes that online reviewers should not charge money to promote a movie, advised production houses to spend their money in a wise way. He also firmly believes that social media influencers has nothing to do with a success of a movie. His tweet read as “Dear Tamil Film Producers – Social Media influence have no effect on recent releases two movies. One movie celebrated and other one thrashed but BoxOffice gives different results. Spend your money wisely instead of wasting 10Lakhs on Influencers.”

Dear Tamil Film Producers – Social Media influence have no effect on recent releases two movies. One movie celebrated and other one thrashed but BoxOffice gives different results. Spent your money wisely instead of wasting 10Lakhs on Influencers.

The two films Balaji was mentioning are most probably Kaapan and Oththa Seruppu 7. However, we couldn’t identify which movie is doing better financially. On seeing this tweet, the official twitter handle of popular theatre Ram Muthuram Cinemas replied by saying that producers could try promoting their movies in Television as in older days. He said that social media helps only for small budget movies. Here’s how Balaji replied to him :

Balaji also said that Youtube interviews are doing much impact than television promotional interviews as it reaches every mobile through Whatsapp nowadays.

Not now. Now YouTube interviews have wider reach since it travels to every mobile via whatsapp

Fans who witnessed these tweets of Balaji felt that 10 lakhs is way too higher for those reviewers and trackers. Check out some of their reactions here :

10 lakhs is waste. Instead they can use that money to promote the movie in a better way. Waste to pay these useless idiots who uses chance to take photo & party with celebrities 😂

Same person had said earlier production houses need to spend on hiring social media management teams to promote their films as SM is the future.

What do you think on movies getting promoted in this way ?? Comment your views below !!

Previous articleNot Only In BB HOUSE, Vanitha & Kasthuri Thrashing Each Other In Public !!
Next articleDirector Parthiban Posted A Casting Call Tweet & Deleted It Immediately !! Check Out The Reason !!

Seven luxury cars were stolen from the parking lot of a Hyundai showroom at Manapakkam early this morning. According to sources, a gang of unidentified persons targeted the...

“COVID ?? What Does That Mean?” – Celebrity On Seeing Natarajan’s Welcome Video !!

Thangarasu Natarajan received a grand welcome in his hometown Chinnappampatti after helping team India in clinching the test and Twenty 20 series against Australia...