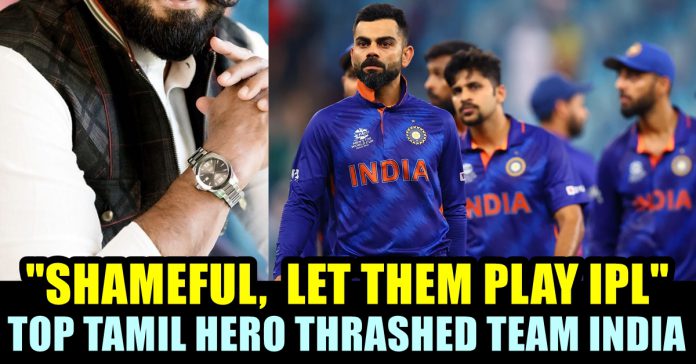 Dreams of team India winning the T20 world cup for the second time shattered after the Kohli led team faced a humiliating loss in their match against New Zealand. Cricket experts, fans, former cricketers and many others has been expressing their displeasure over the team which was expected to win the tournament. Along with many, Tamil cinema’s leading actor and politician Sarath Kumar came up with a tweet criticizing the performance of Indian team.

Actor Sarath kumar who is known as a ardent follower of Indian team’s cricket, came up with a tweet expressing his disappointment over the team. He who identifies himself as a keen sports enthusiast through his Twitter bio, said that it was an irresponsible performance from the team.He also wanted the team to walk out before getting humiliated to teams such as Namibia, Scotland and Afghanistan. Pointing out that other teams are playing for their country, Sarath said that the boys of India only deserve to play IPL and criticized the way they understood t20 game.

“Substandard Shameful irresponsible performance of our team, they should pull out before we get humiliated by Namibia,Scotland and Afghanistan, others are playing for their country and seem to have studied T 20 game better,let our boys play IPL #T20WorldCup21 #IndiaVsNewZealand” read his tweet.

Substandard Shameful irresponsible performance of our team, they should pull out before we get humiliated by Namibia,Scotland and Afghanistan, others are playing for their country and seem to have studied T 20 game better,let our boys play IPL #T20WorldCup21 #IndiaVsNewZealand

IPL is not representing a country itis totally different when you play for the country,you should know to handle adopt and play and cut loose the pressure that exists

When our sentiments are involved as a nation and a true Indian it hurts,let it hurt them and let them perform better,

If the team gets motivated by criticism and plays well we all will be proud,criticism is to be taken well for growth

Will selectors allow public opinion yo select a team,there is a lot of difference between IPL and World Cup

I think we should adapt a different approach of attacking from the beginning and every player will go for runs, this could help