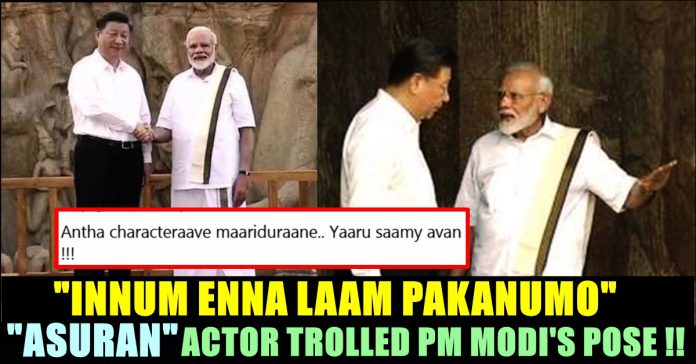 India and China have decided to start a new chapter in their relationship with the “Chennai Vision”, Prime Minister Narendra Modi said today after holding a second round of informal talks with Chinese President Xi Jinping. The two leaders on Friday bonded over a tour of the temples of Mahabalipuram, now known as Mamallapuram, followed by cultural programmes and dinner that went well beyond the scheduled time.

India and China agreed that they need to work together to fight “radicalisation and terrorism as common challenges”, the government said in a late-night press briefing on Friday. Xi Jinping urged both the countries to take the 70th anniversary of China-India diplomatic relations next year as an opportunity to conduct broader and deeper cultural and people-to-people exchanges, China’s state media Xinhua News Agency reported.

Many people of social media are reacting to the event and as usual the hashtag of Go Back Modi trended in Twitter yesterday. Meanwhile actor Prakash who is known for being a Anti-BJP supporter took to twitter to express his thoughts on one of a picture of Modi and Xi Jinping posing for a picture.

As soon as this post surfaced, reactions started pouring in the comment section of his tweet. Few people asked him to support Modi in this kind of situation as it is a matter of receiving a guest. Few people trolled the Prime Minister along with him as well.

When it is about country you have to be positive sir……..yes we have issues but it should not be highlighted when third person is in our house……….

Better actor than you..

Sivaji Ganesan missed Oscar, Rajkumar misses Oscar and not sure if you can win but Namo will make it to Oscar's.

Prakash Raj is often criticized for stating opinions against Modi and one of the many politicians who got devastated after knowing the election results. The popular actor who is known for his performances in movies like Gilli, Anniyan was last seen in Danush’s Asuran as a lawyer. The actor was very much appreciated for taking up the role and performing it in his own way. What do you think on this tweet of Prakash Raj ?? Comment your views !!