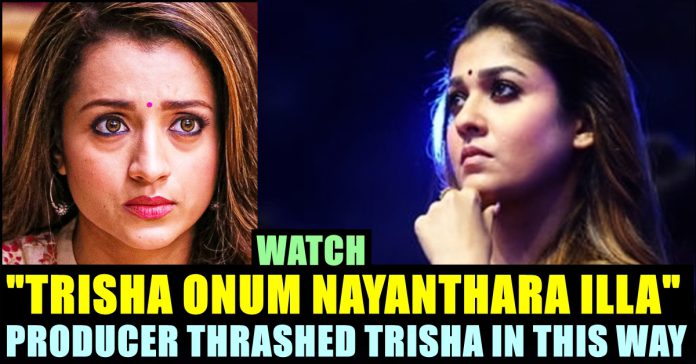 Veteran film producer T. Siva who is also the founder of Amma creations has compared actresses Trisha and Nayanthara in one of his recent interaction with Indiaglitz. In the interaction, T.Siva said that Trisha hasn’t reached the fame and market of her colleague Nayanthara yet. He said it due to Trisha’s absence in one of a promotional event of her upcoming

“One can question why we can’t question Nayanthara in the similar issue as she is also not taking part in the promotional events. In her agreement, she informs that she couldn’t attend the promotional events due to her privacy and security reasons. Same with Ajith Kumar sir. We are making films by accepting their terms and conditions” Siva said in the interaction. (Also Read : Trisha Got Slammed By Producers For This Reason !!)

“Further there is no need for Nayanthara to attend promotional events as her name itself a huge glamour. But Trisha hasn’t reached that level. She should work on promoting herself by attending such functions to gain a successful career. Nayanthara doesn’t need to give TV interviews to make people watch her movies as she reached a whole next level. Heroines like Trisha should attend promotional events to reach that level” said Siva.

Trisha debuted in Tamil film industry as heroine through Mounam Pesiyathe in 2002 whereas Nayanthara debuted in Sarathkumar’s Aiyaa in 2005. Both the actresses are known for pairing with actor Vijay and Ajith. Comment your views on T.Siva’s statement on Trisha’s market value !!

Priya Bhavani Shankar who earlier gave a solid warning to a fake profile which was created in her name and having her photo as...

The Super Four stage of the Asia Cup 2018 got underway today with all the four teams in action. The Indian team having won...