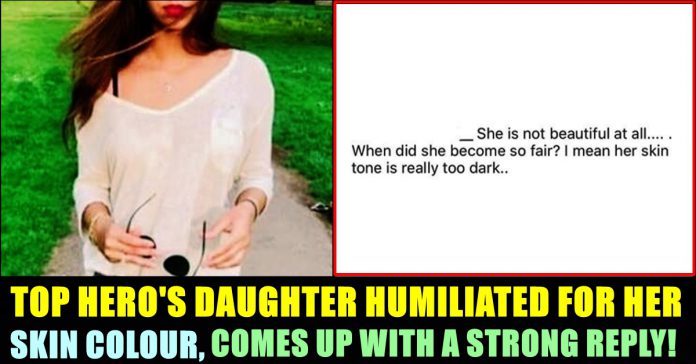 Be it colour, race, caste, religion or gender, Discrimination in any form must be avoided for the betterment of our society. Not only the poor, through this story shared by Suhana Khan, we are informed that the most influential people are also going through such humiliations. Daughter of the Bollywood Badshah, has said that she was told that she is ugly because of her skin tone.

Sharing the story in her official Instagram account, Shah Rukh Khan’s daughter felt that her story needs to be addressed at this time. The 18 year studied film at England’s Ardingly college and is currently a student at the New York University. In her social media post, Suhana tried to normalize being dark skinned among the people who has a thing for white skin. She shared a number of screenshots through her post in which we can see people making mean comments about her skin tone.

Here are the screenshot she shared. She translated some of the Hindi comments herself :

Suhana feels that it is not just a story about herself but about every boy and girl who feels inferior for no reason. She says that she was branded as “ugly” by fully grown men and women just because of her skin color since she was 12 years old. We all are Indian which makes us automatically brown, Suhana says through her post.

She looked very disappointed on seeing people of her own hating her for the colour of her country. “I’m sorry if social media, Indian matchmaking or even your own families have convinced you, that if you’re not 5″7 and fair you’re not beautiful. I hope it helps to know that I’m 5″3 and brown and I am extremely happy about it and you should be too. #endcolourism” her post read.

Check out the post uploaded by Suhana below. Swipe to see the screenshot she shared with Translation :

There’s a lot going on right now and this is one of the issues we need to fix!! this isn’t just about me, it’s about every young girl/boy who has grown up feeling inferior for absolutely no reason. Here are just a few of the comments made about my appearance. I’ve been told I’m ugly because of my skin tone, by full grown men and women, since I was 12 years old. Other than the fact that these are actual adults, what’s sad is that we are all indian, which automatically makes us brown – yes we come in different shades but no matter how much you try to distance yourself from the melanin, you just can’t. Hating on your own people just means that you are painfully insecure. I’m sorry if social media, Indian matchmaking or even your own families have convinced you, that if you’re not 5″7 and fair you’re not beautiful. I hope it helps to know that I’m 5″3 and brown and I am extremely happy about it and you should be too. #endcolourism

Suhana inherited her love for acting from her father and acted in a short film named as “The Grey part of Blue” directed by Theodore Gimeno. Comment your views on the statement of Suhana !!