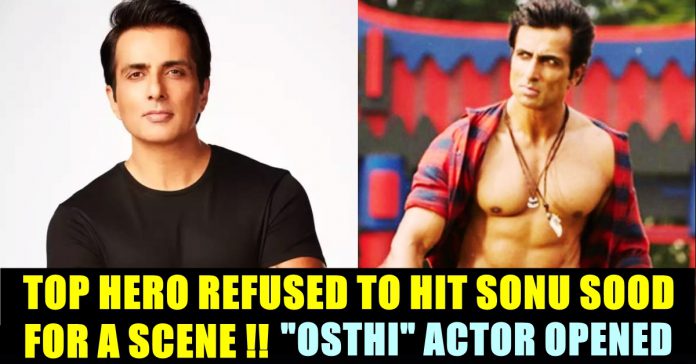 Bollywood actor Sonu Sood, in an interaction with a media channel had said revealed how South Indian Superstar Chiranjeevi refused to hit him while making a scene due to the imagine he gained in the outside world. The actor had said that filmmakers started approaching him for the lead roles in their films due to the philanthropic work for migrant workers during the lockdown implemented by COVID 19 outbreak.

The actor is known for acting in films such as “Osthi”, “Arunthathi” “Nenjinile” etc. His films in bollywood Dabangg, Jodhaa Akbar, Simmba were also became huge hit among the fans. During the virtual season of We Women, Sonu Sood shared how 2020 changed his life upside down. “I am getting all hero roles now. I have got four five brilliant scripts now. Let’s hope. It’s new beginnings. It is a new pitch and it will be nice and fun” he said in the event.

He further recalled an incident that took place in a shooting of Telugu film named “Acharya” which has Superstar Chiranjeevi in the lead role. Sonu revealed that Chiranjeevi refused to hit him for a scene due to the off screen image he gained during the lockdown situation.

“We were doing an action scene and Chiranjeevi sir said ‘You being in the film is it self a problem for us because I can’t hit you in the action scene. If I do that, people will curse me’. There was another sequence where he was placing his feet on me but that too was reshot” Sonu Sood shared.

The actor also revealed that the makers of another Telugu film have changed the script according to his new image. “Now I have to shoot my portions again” Sonu said.

During the lockdown, Sonu and his team had provided a toll free number and a Whatsapp helpline to connect with workers and then arrange transportations such as buses, trains even charted flights as well as food for the stranded migrants. Sonu believes that some force is working behind him and guiding him during the lockdown period.

On 20th of December Sonu uploaded a tweet writing “One of the nicest and the most humble actor I have worked with is undoubtedly @KChiruTweets. Love you Chiru sir” in his tweet and received a reply from Chiranjeevi. “Thank you @SonuSood You are one of the finest human beings. Keep up your amazing work to help the needy & keep inspiring lakhs more. More power to you! You deserve all the recognition for your golden heart!” reply of the Telugu Superstar read.

Thank you @SonuSood You are one of the finest human beings. Keep up your amazing work to help the needy & keep inspiring lakhs more. More power to you! You deserve all the recogntion for your golden heart! https://t.co/cjQQoeOUZY

List Of Celebrities Who Celebrated Dhoni’s Innings As Their Personal Achievement !!

A list of cinema celebrities including actor Dhanush, director Lokesh Kanagaraj, Vignesh Shivan and many others celebrated Dhoni's innings as their personal achievement through...

Ravichandran Ashwin who achieved the milestone of picking 400 wickets in test cricket in the third test against England, came up with a series...