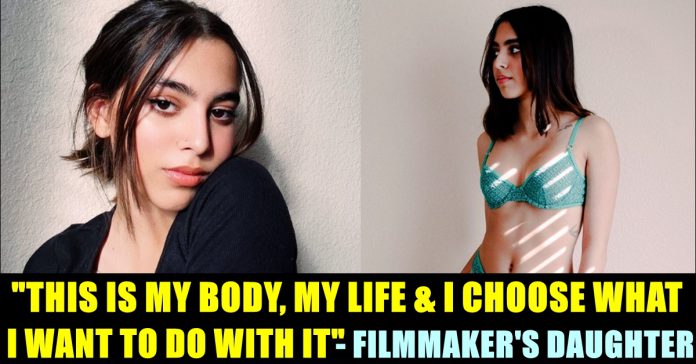 Director/Actor Anurag kahsyap’s daughter Aaliya Kashyap came up with an Instagram post calling out the harassers who abused her for uploading a picture in her official Instagram account. The 20 year old who said that the vulgar comments forced her to think of deleting her Instagram account, called out the harassers who physically assaulted her when she was a minor. She also shared some of the vile comments she received for her posts.

Anurag Kashyap is an Indian film director, writer, editor, producer and actor known for his works in Hindi cinema. He is the recipient of several accolades, including a National Film Award, and four Filmfare Awards. He is very much known among Tamil audience for his role as a villain in Nayanthara’s Imaikkaa Nodigal. The familiar personality’s daughter Aaliya Kashyap is pretty much active in social media platforms.

Now, in a recent post in her official Instagram account, Aaliya came up with a post slamming the harassers. “The past few weeks have been really hard
on my mental health. Ever since I posted a photo of me in lingerie, I have been getting the most vile, degrading and disgusting comments. I have never felt more frightened than I have in the past few weeks to the
point where I considered deleting my instagram. I have tried to ignore the
harassment and shrug it off but the truth is that we need to speak about it because these kind of comments contribute to the rape culture that affects all women in india (and the rest of the world) in one way or the other.” read the post of her.

“We seem to be a country that will hold candle marches fora woman after she’s been sexually assaulted but won’t protect a woman while she’s alive. And the truth is that women in India grow up being sexualized their whole lives. I have grown up with these kinds of comments to the point where it culminated into me being sexually assaulted as a minor by a middle aged man. The double standard is that many of the people who have harassed me, along with many other woman, are hypocrites. They love to pretend that they’re on a moral high ground but in reality, they are the ones promoting the rape culture that exists.” she wrote in her post further.

“They are the same men that are fine with following me and consuming the content post, yet choose to harass me. If you truly disagree with what I post, then you are free to unfollow me. Nothing I do or post is an invitation for sexual assault. Nothing any woman does, ever can be. So instead of policing women how to dress or how to act, we should unteach men the predatory
behaviour that has been so normalised in our society. This is my body, my life and choose what I want to do with it.” Aliya concluded to express her frustration and added the pictures of the abusive comments.

Check out the comments shared by Aliya in her post :

TW: sexual assault, rape || thank you @shaiwriting for helping me put my thoughts and feelings into words 🤍” Aaliya wrote as her caption while adding the post.

This post from the youth garnered support from her friends and followers. People also flooded the comments section of her post to express their support for her. Alaviaa Jaaferi and Alanna Panday dropped heart emojis, while Khushi Kapoor wrote, “I love you. I’m proud of you.” Actor Kalki Koechlin commented, “Proud of you for sharing this.”