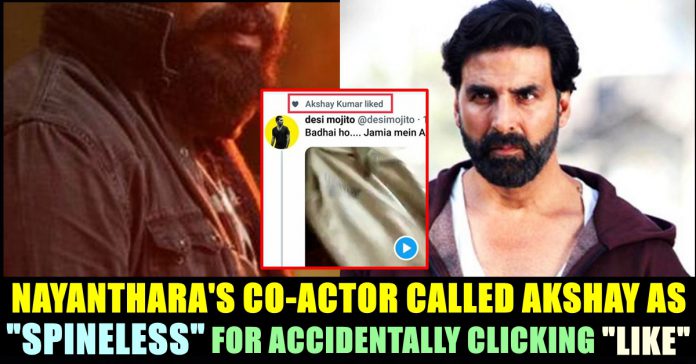 Actor Akshay Kumar found himself in controversy after he accidentally liked a post regarding the attack on students. Students of Jamia Milia university in Delhi involved in protest against the Citizenship Amendment act passed by central government. The trouble started Sunday evening after a protest march by the Jamia students ended in a pitched battle with the police, vandalism and torching of vehicles. The police, which used batons and teargas to contain the violence, later barged into the university and detained around 100 students. All the detained students were released around 3:30 am.

Then it has been reported that Students across Tamil Nadu including at IIT, Madras in Chennai held protests against Citizenship Amendment Act, as well as the police action against their counterparts in Jamia Milia University in Delhi. Celebrities across India are raising their voice against the attack on students. But actor Akshay Kumar who is one of the leading actors in Bollywood has “Liked” a post of students getting attacked in Twitter.

This Twitter activity of the 2.0 actor created huge furore as many people thought that he is supporting the activity of central government. A screenshot of the actor “Liking” the post is going viral in social media platforms with angry reactions.

In a way of reacting to the uproar, Akshay Kumar immediately came up with a tweet saying “Regarding the ‘like’ on the tweet of Jamia Milia students, it was by mistake. I was scrolling and accidentally it must have been pressed and when I realised I immediately unliked it as In no way do I support such acts.”

Regarding the ‘like’ on the tweet of Jamia Milia students, it was by mistake. I was scrolling and accidentally it must have been pressed and when I realised I immediately unliked it as In no way do I support such acts.

Check out the screenshot of the tweet shared by Anurag :

Since the attack on students took place, Anurag Kashyap has been raising his voice through his official twitter account. The filmmaker is known for his posts against Prime Minister Modi as he feels unsatisfied with the leadership qualities of him. Anurag is known among tamil audience for his acting in the film “Imaikkaa Nodigal”. Some of his notable directorials are Gangs of wasseypur, Raman Raghav etc.

Previous articleMan Attacked Sarathkumar’s Personal Life !! Here’s How The Actor Replied !!
Next articleRajinikanth To Act In A “Transgender” Role ?? WATCH !!

"Cool" Suresh opened about his income for the first time in an interview with Behindwoods youtube channel. The comedy actor said that his only...