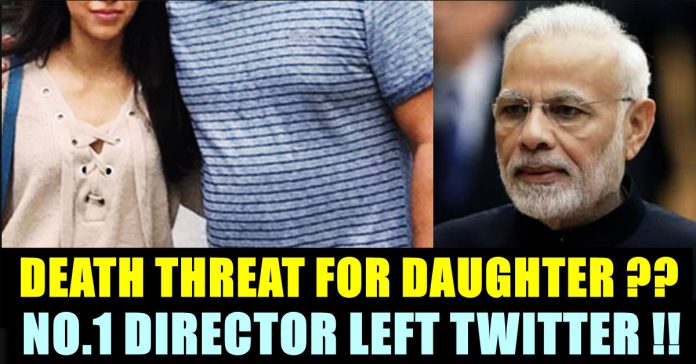 Anurag Kashyap is an Indian film director, writer, editor, producer and actor known for his works in Hindi cinema. He is the recipient of several accolades, including a National Film Award, and four Filmfare Awards. He is very much known among Tamil audience for his role as a villain in Nayanthara’s Imaikkaa Nodigal.

Anurag currently not in a right phase of his life it seems. Months ago, he tweeted to say that a random Instagram user threatens to rape his daughter. “Dear @narendramodi sir. Congratulations on your victory and thank you for the message of inclusiveness. Sir please also tell us how do we deal with these followers of yours who celebrate your victory by threatening my daughter with messages like this for me being your dissenter.” the tweet of Anurag said. Kashyap later filed an FIR at the Amboli police station in Mumbai against the troll who had threatened his daughter. The filmmaker who has frequently criticised the Prime Minister, now left twitter for a serious reason.

In his last tweet, Anurag Kashyap wrote, “When your parents start to get calls and your daughter gets online threats you know that no one wants to talk.There isn’t going to be reason or rationale. Thugs will rule and thuggery will be the new way of life. Congratulations everyone on this new india & hope you all thrive.”

He then tweeted, “Wish you all the happiness and success. This would be my last tweet as i leave twitter. When i won’t be allowed to speak my mind without fear then i would rather not speak at all. Goodbye.” Here’s some of the reactions for this activity of him :

Very sad that @anuragkashyap72 have deleted his @Twitter account today. It is sad & bad for democracy when we cant voice our opinion without fear. His Right to say was our Responsibility as a Nation. #AnuragKashyap, please come back, we are all with you 🙏

One of the very few sensible guys online.

#AnuragKashyap quits twitter amid threat from goons over his point of view(article 370),that is worrying many people,who will look after it?

What happened to #AnuragKashyap will one day happen to every one ..

This is some different India which I had lived in ..

On the work front, The filmmaker is all set to return with the second season of his popular and acclaimed Netflix series, Sacred Games on Independence Day. As the clock ticks for the premiere of the new season, Kashyap recently said the pressure of living up to expectation is heavy, but he is happy with the content.

“I feel the pressure is more this time. When we started the first season, we had no idea of the impact we were going to create. So, we could do just what we wanted to do,” Kashyap told IANS during a set visit of the show.

Previous articleWhy Danush Fans From Tamilnadu Are Lauding Hardik Pandya ?? Check Out The Reason !!
Next articleAfter All These Months, Fan Tried To Troll Ashwin Due To His “Mankad” !! Check His Reply !!

S. Ve. Shekhar is a Tamil playwright and film actor. In 2006, he made an entry into politics by contesting and winning the Legislative...

Samantha’s Own Fans Got Upset On Seeing This Post Of Her !!

After expressing her awe for Kangana Ranaut's performance in the trailer of her upcoming film "Thalaivi", Samantha Ruth Prabhu came up with a tweet...