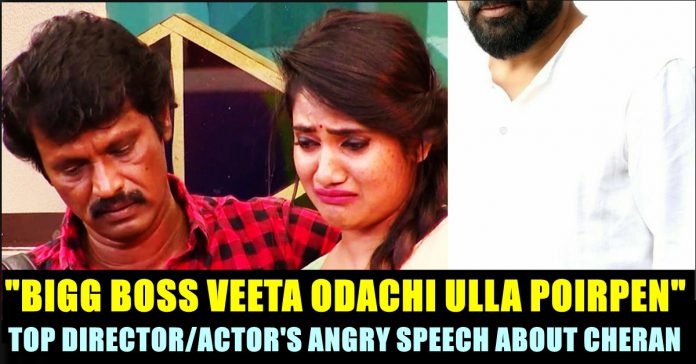 Ameer Sultan, a film director, producer and actor, working in the Tamil film industry, spoke about Cheran’s participation in Bigg Boss show. Ameer has directed four films and was critically acclaimed for three of them, the romantic comedy Mounam Pesiyadhe, the mystery thriller Raam, the drama Paruthiveeran and Aadhi Bhagavan. He made his acting debut in Yogi and lauded for his latest performance in Vada Chennai.

Being a family friend of Cheran, Ameer talked about Cheran’s existence inside the Bigg Boss house. “I never watched single episode of Bigg Boss show. A friend of mine showed me the particular footage of Cheran shedding tears because of an allegation made by a female contestant. Truly, for a second, I thought of breaking the door of Bigg Boss house to bring him outside.” said Ameer in the interview.

Ameer shared from how he met Cheran for the first time to the director phone called him to inform that he is going into the Bigg Boss house. He reiterated the achievements of the veteran director and also made everyone realize how lack of finance brings a man down. Cheran is one of the contestants in the third season of the TV reality show Bigg Boss Tamil. The last film he helmed was ‘Thirumanam’ which released earlier this year. Recently, during a task on the show, Cheran had revealed why he entered Bigg Boss Tamil 3. He shared that actor Vijay Sethaputhi was the one who made him to enter the show while answering a question on why he chose to be a part of the show.

The director has been in the center of attention for many reasons. The incident Ameer mentioning was started when Cheran pushed away Meera Mithun while grabbing something from Losliya as a part of his task. To report about this, Meera called for a gathering and said that Cheran physically harassed her. Meera started to accuse Cheran in front of everyone blatantly.

At one point Cheran broke down and worried by thinking the future of his daughters. “In my 10 films, I have never kept a shot for navel and breasts of my heroines. People who like me would believe me but people who dislike me would talk in my back very badly” he said to the other contestants. As soon as watching the episode, the viewers of BIGG BOSS started to dig the past of the model to thrashed her.

What do you think on this speech of Ameer ?? Comment your views !!

In a world which is filled with negativity, actress Sameera Reddy runs an Instagram account only to spread positivity. She never lets her followers,...