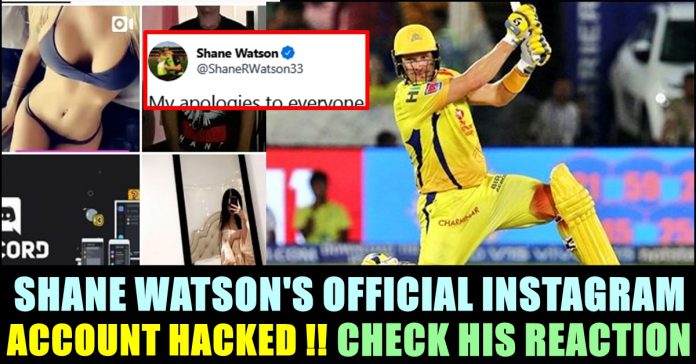 Shane Watson, the most celebrated player of Chennai Super Kings in the latest edition of IPL, is facing some serious issues with his official social media accounts. The cricketer whose Twitter account was hacked a couple of days earlier, is facing the same issue with his official Instagram account which has followers more than 12 Lakhs.

The vicious hacked who didn’t stop at hacking, started posting obscene pictures in the official account of the high profile Australian cricketer. On knowing this, Shane who got panicked, rushed to twitter to alert his followers and of course, the 38 year old all rounder seemed very angry.

Followed by this, Watson posted another tweet urging Instagram to sort the problem out as quicker as possible. He also appreciated twitter for their immediate reaction to his earlier issue.

Last Friday, Watson’s twitter account was hacked and it was renamed as “Criminal” for nearly an half an hour. The hacker started posting obscene contents such as fat shaming and racial slurs among others. However, it was restored immediately and the offensive posts were deleted.

The one who hacked Shane’s Instagram account is testing the patience of the cricketer by posting extremely obscene pictures of women. Following are few of the screenshots from the hacked account of Shane watson :

Shane Watson won millions of hearts for his innings in the finals of IPL 2019. The cricketer who was seen shedding blood during his innings, scored 80 from 59 balls, but he was run out off the third-last ball of the match, with his team within four runs of victory. However, CSk lost the match to Mumbai Indians by just 1 run.

Shane watson, one of the highly recognised all rounder in the world, represented Australian cricket during its golden era. He debuted in 2002 in a One Day International and retired in 2016 as world No. 1 T20I all-rounder. He was the last player to retire from Australia’s golden era of the early 2000s. According to Forbes, Watson was the highest-paid non-Indian cricketer in the world for five consecutive years, 2011 to 2015.

Previous articleBIGIL Not To Release On Diwali Because Of Assistant Director KP Selvah ??
Next articleArun Vijay Happily Posted A Family Picture Without Vanitha !! Here’s How She Reacted To It !!

Ashwin Got Trolled For Smelling Jerseys!! Here’s His Response

Ace Indian spinner Ravichandran Ashwin became a subject to online troll after a video of himself smelling two jerseys to find which one is...