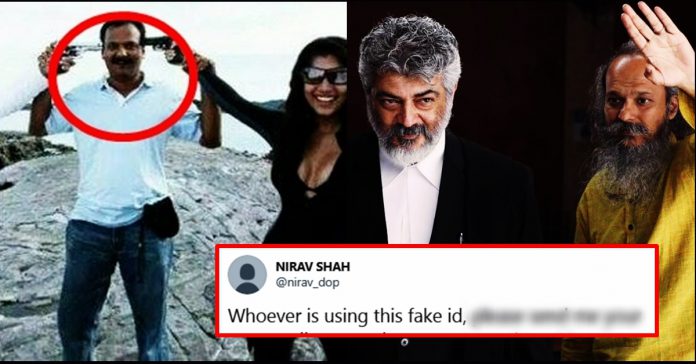 But there are one kind of fans who creates accounts of their favourite celebrities to gain more number of followers. Celebrities such as Nayanthara, Ajithkumar are not having an account in any platform of social media but fake accounts of them are still existing which will be posting their updates collected from sources like an official account.

Now in that list, popular cinematographer Nirav shah has joined. He is known for his cinematography work in a number of major box office hits in Hindi, Tamil and Malayalam since his debut with the 2004 Hindi film Paisa Vasool. Shah’s works in films including Arinthum Ariyamalum, Billa and the most recent Nerkonda Parvai got high praise and much critical acclaim, turning him into one of the most sought-after cinematographers in Kollywood.

Now the cinematographer is going to work in Ajith Kumar’s most anticipated upcoming film “Valimai” which is going on floor in coming December. A Twitter fake ID of Nirav Shah said that Nirav is going to visit the location for Valimai.

Tomorrow we going To see The Location for #Valimai shooting 💥 . And Shooting Starts On December 🎥
@BoneyKapoor @ZeeStudios_ @BayViewProjOffl

On seeing this tweet, the real Nirav shah came up with an hilarious tweet to troll the guy who is handling that fake account. “Whoever is using this fake id, please send me your tweets. I’ll correct the grammar and send it to you. Just got scolded by my 2nd standard English teacher.” said Shah in his tweet.

Whoever is using this fake id, please send me your tweets. I’ll correct the grammar and send it to you. Just got scolded by my 2nd standard English teacher. pic.twitter.com/MoxyhQaZPB

Check out his reply to one of his follower :

I love the smartness. If I wasn’t smart, I would’ve never found out. Now I’m thinking I’ll fake Deakins’ or Chico’s id

In one of an interview, director Vinoth who worked with him in “Nerkonda Parvai” movie said that Nirav is a jovial guy who loves to make jokes. Three of Nirav’s films have been nominated at the National Award for the Best Cinematographer: Banaras, Pattiyal and Dhoom 2. He won the Tamil Nadu Government’s State Award for Best Cinematographer for Billa.

What do you think on this reply of Nirav ?? Comment your views !!

Cyclone Nivar is expected to cross the coasts of Tamil nadu and Puducherry and make a landfall between Mamallapuram and Karaikal on November 25...