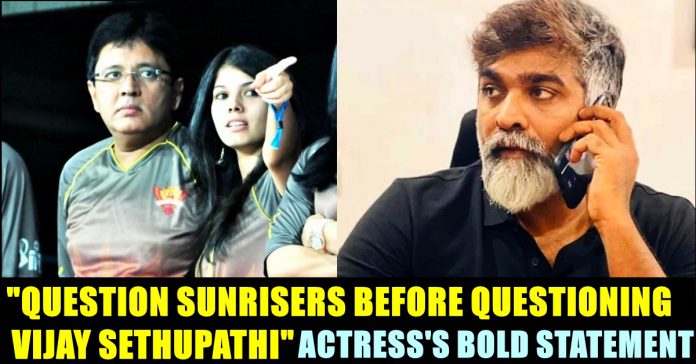 On seeing the hatred being spread against Vijay Sethupathi for accepting to represent Muttiah Muralitharan in his biographical picture, Veteran actress Radhika Sarathkumar, came up with a series of tweets supporting her colleague. The actress who has 40 plus years of experience in the film industry, asked the people who oppose Vijay Sethupathi to question the management of Sunrisers Hyderabad before questioning her “Naanum Rowdy Thaan” co-star. Radhika Sarathkumar firmly says that an actor should not be curbed in such issues.

Even since the promotional posters of “800 the film” released, users of Internet are expressing their disappointment over the project. Even after seeing the explanation of Muttiah Muralitharan and the production house, a set of people are strongly opposing the project. They are highly believing that Muttiah Muralitharan is a traitor to Tamil community who gave up Tamils during the war situation.

Now, Radikaa Sarathkumar, in her tweet, wondered whether the people who are opposing Vijay Sethupathi doesn’t have work. She raised a question asking why they are not questioning the owner of Sunrisers Hyderabad who appointed him as head coach to his team. She made it clear that an actor should not be curbed.

#muthaiyamuralitharan biopic &asking @VijaySethuOffl not to act😡do these people hav no work??why not ask @SunRisers why he is the head coach, team belongs to a Tamilian with political affiliations?VSP is an actor, and do not curb an actor. VSP&cricket both don’t warrant nonsense

In her next tweet, Radikaa explained how the owners Sun TV and Sunrisers are distinctly and professionally handling politics, sports and entertainment with due credits for all these decades. “Why not our film industry look at entertainment away from political viewpoint.?” her tweet read.

The owners of #Sunrisers, & #SunTV, though they have political affiliations, all these decades they could distinctly & professionally handle politics, sports & entertainment with due credits. Why not our film industry look at entertainment away from political view point. 1/2

An hour later, Radikaa posted another tweet saying that her intention is not to create controversy but to support the film industry and connected artists. “my intention of that tweet was not to create any room for controversies but was to support the film industry and the connected artists within prejudices. That’s why I brought in #Sunrisers name as a testimony of non biased, neutral and professional approach” read her last tweet regarding the issue.

my intention of that tweet was not to create any room for controversies but was to support the film industry and the connected artists within prejudices. That's why I brought in #Sunrisers name as a testimony of non biased, neutral and professional approach

So far, some of the main people of Tamil film industry including Bharathi raja, Cheran, Lyricist Thamarai has advised Vijay Sethupathi to remove himself from the project. “We started our life as daily wagers in a tea garden in Sri lanka. Due to the war which took place for 30 long years, we, upland Tamils are the first one who got affected. As far as I remember, we always suffered a lot due to this war situation. My father was killed when I was 7. Many of my relatives died. We lost our livelihood many times and suffered. I know the pain that caused by the war. The film “800” is about how I became a cricket player amidst this situation” Muralitharan said in a press release to explain his stand. Read : Muttiah Muralitharan’s Emotional Statement On The Hatred He Is Receiving !!

Previous articleJacquline’s Sharp Reply To Those Who Trolled Her Voice !!
Next articleArchana’s Attitude Towards Suresh Irked This Actor !!

Many Kollywood celebrities including Rajinikanth, Surya, A.R Rahman voted for their favourite party and posted the picture in their official twitter accounts as an...